The 10 Worst Movie Songs Ever!

1.Now Playing in Theaters Near You... 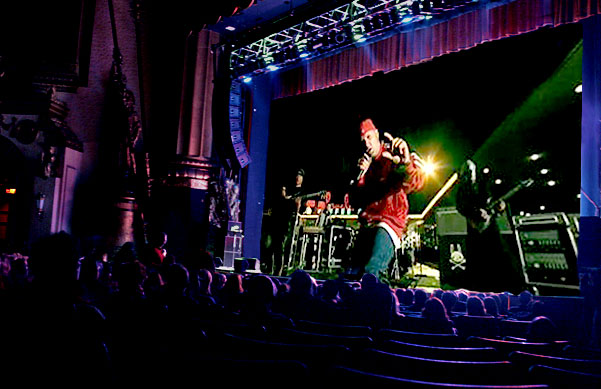 There's no denying the power of a well-placed tune in a blockbuster movie: Eminem's searing 8 Mile banger "Lose Yourself" outshined the film; Randy Newman's Monsters, Inc. theme gave the animated flick a silly, show tune feel and won an Oscar in 2002; and Bruce Springsteen's tear-jerking ballad "The Wrestler" lent even more poignancy to Mickey Rourke's role in Darren Aronofsky's film of the same name. And there's many, many more where those came from.

But what happens when a song is so bad that it turns a movie soundtrack into a movie sucktrack?Take a look at our selections for the worst songs to ever hit the Cineplex below -- audio/video proof included!

2.Now Playing in Theaters Near You...

There's no denying the power of a well-placed tune in a blockbuster movie: Eminem's searing 8 Mile banger "Lose Yourself" outshined the film; Randy Newman's Monsters, Inc. theme gave the animated flick a silly, show tune feel and won an Oscar in 2002; and Bruce Springsteen's tear-jerking ballad "The Wrestler" lent even more poignancy to Mickey Rourke's role in Darren Aronofsky's film of the same name. And there's many, many more where those came from.

But what happens when a song is so bad that it turns a movie soundtrack into a movie sucktrack?Take a look at our selections for the worst songs to ever hit the Cineplex below -- audio/video proof included! 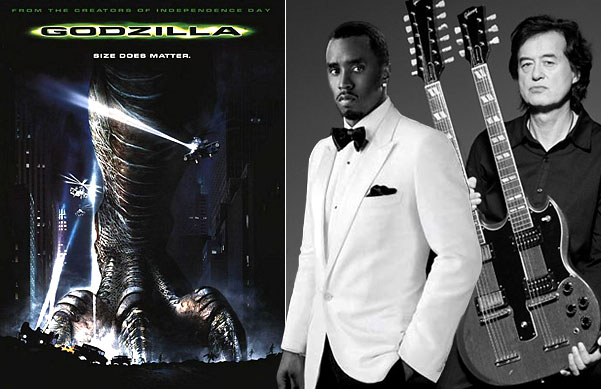 Guitarist Jimmy Page reforming Led Zeppelin sans Robert Plant would have been a better decision than collaborating with P. Diddy (then known as Puff Daddy) on this monstrosity of a song. Recorded for the soundtrack to 1998's similarly awful Godzilla remake, Page's contribution doesn't go beyond permitting the song's sample of Led classic "Kashmir" and adding some shaky "Stairway to Heaven"-aping licks. And Diddy's lyrics simply flunk: "Break the faith / Fall from grace / Tell me lies / Time flies / Close your eyes." Ouchhhhhhhh…

Watch: "Come With Me" 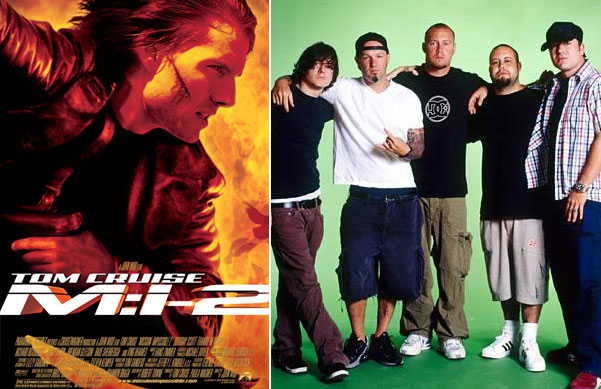 Limp Bizkit, this is your mission, should you choose to accept it: ruin one of television's greatest theme songs.Clearly, the nu-metal group had no problem accepting -- their contribution to 2000's Mission: Impossible II soundtrack is just painful.Droll rap-rock guitars and moronic metaphors ("Does anybody really know the secret / Or the combination to this life, and where they keep it?") abound, completely bastardizing composer Lalo Schifrin's original work. The accompanying music video, which features the band as average Joes masquerading as secret agents (or something), was so bad that even Bizkit frontman Fred Durst has reportedly dismissed it since -- and he directed the damn thing!.

Watch: "Take a Look Around" 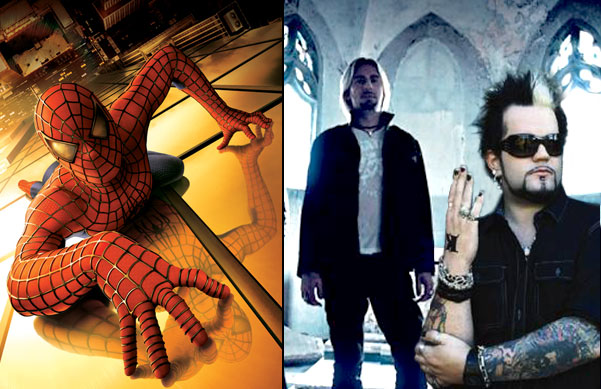 "I am so high, I can hear heaven," Nickelback frontman Chad Kroeger sings in the beginning of this track, penned for 2002's Spider-Man soundtrack.So what does heaven sound like when Canada's biggest rock star gets stoned? An orchestra crashing head-on with bar brawl. Josey Scott of nu-metal group Saliva joins in a achingly funny call-and-response with Kroeger near the tune's end ("Watchin' us / Watchin' us / Watchin' us"), leaving one remaining question: how much money did they have to pay Pearl Jam's Matt Cameron to play drums on this song? 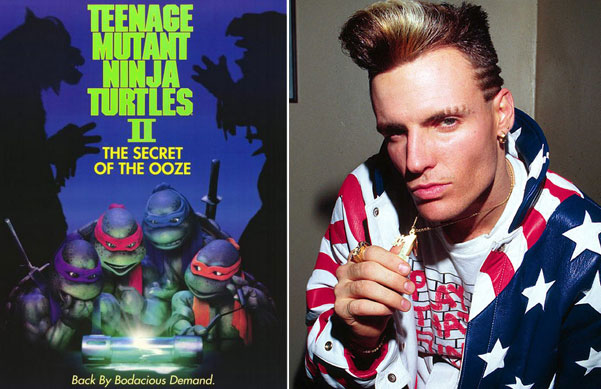 from Teenage Mutant Ninja Turtles II: The Secret of the Ooze

Midway through this 1991 flick, the reptilian foursome confront a gang of baddies in a crowded nightclub.Panic ensues, so the club's headlining performer -- played by Robert Van Winkle, a.k.a. Vanilla Ice -- attempts to quell the crowd by improvising the "Ninja Rap."While you have to admire Ice's peacemaking intentions, the result -- verses that were probably written minutes before filming ("Lyrics / Fill in the gap / Drop that bass / And get the ninja rap") -- leaves one wondering if the clubgoers would have been better off joining the brawl. 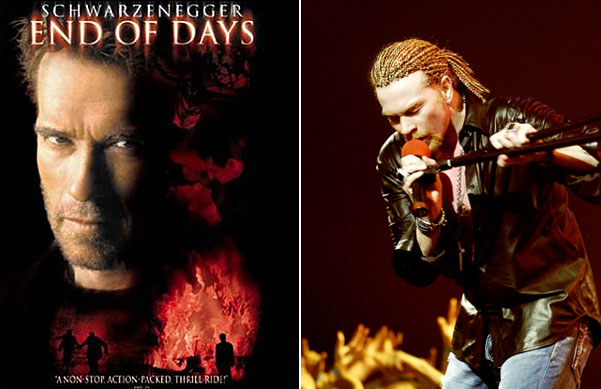 from End of Days

At the end of the '90s, Axl Rose emerged with a mostly new lineup for Guns N' Roses to release "Oh My God," their first new material in five years. And where does the song get its big debut? The soundtrack to 1999's Arnold Schwarzenegger-vs.-Satan box office flop End of Days. The overstuffed guitar parts and grinding rhythm of "Oh My God" is a better representation of Hell than anything the Governator faces in the film. And its monotone, melody-less chorus is so horrid that the Catholic Church should've condemned it. 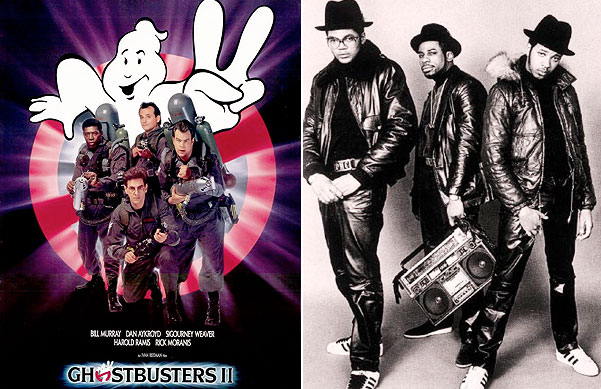 from Ghostbusters 2
Everything about the 1989 sequel Ghostbusters II is positively lazy in comparison to the 1984 original megahit -- and this lifeless soundtrack contribution from Run-D.M.C. is no exception.The insistent beat of "Ghostbusters Rap" sounds like it is directly ripped from the hip-hop trio's classic "It's Tricky", while Rev Run and D.M.C.'s vocal delivery and goofy ghost rhymes ("Chill down your spine/ Your heart fills with fright/ Not filled by the things/ That go bump in the night")sound as stiff as a corpse."Something's wrong," Rev Run states nervously at the beginning of the tune. You ain't kidding, man. 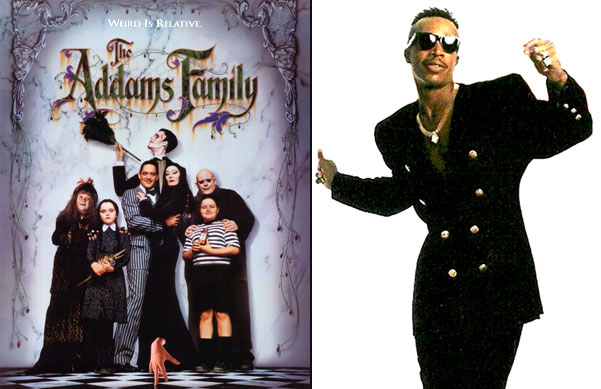 from Addams Family
Now here's a conundrum: In M.C. Hammer's contribution to this 1991 remake, he raps about how weird his new neighbors are (crawling dismembered hands! A person covered entirely in hair!) Yet in the video, he's chilling at their crib, enduring a variety of threatening situations when all he wanted to do is borrow some pepper for his dinner. If you think the people next door are psychos, why would you bring your entire crew over to dance on their dinner table?Perhaps Hammer realized the ridiculousness of the situation, which would explain why he gives up on rapping two minutes into the song and simply repeats the chorus ad nauseam. 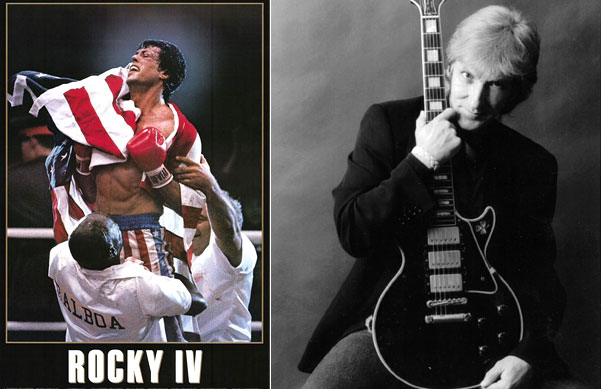 Alright, we'll relent: this jam is the perfect soundtrack to Sylvester Stallone's epic training scene in 1985's Rocky IV. Hey, thanks to songwriter John Cafferty, even the scene in which Russian boxing badass Ivan Drago injects steroids feels triumphant (new genre: steroid music).Listening to this song without the visual accompaniment, however, is the opposite of inspiring -- unless you're motivated by screeching synthesizers, cheesy guitar wails, and Cafferty's vocals, which sound like Huey Lewis… had he been a life-long chain smoker. If you are inspired by this song, we have one thing to say: thanks for reading, Mr. Stallone! 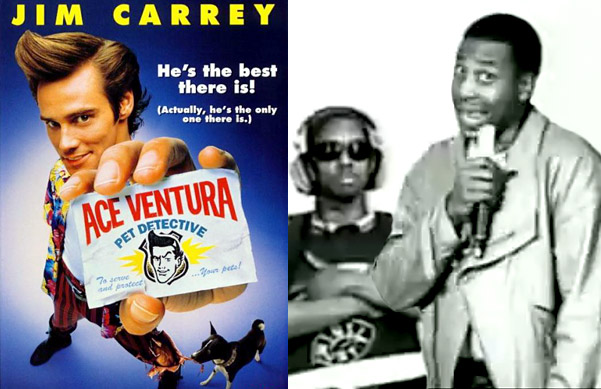 In this 1994 comedy blockbuster, Jim Carrey established his own brilliant brand of gross-out humor… which became ubiquitous with eighth graders worldwide (Schwinnnggggggg!). Then popular hip-hopper Tone Loc tried to one-up him with his lyrics to the film's theme -- but the result ended up just nasty: "Checkin' all of his bitches at home / But I'm the dog with the biggest bone." Ew! The gruff-voiced rapper's other attempts at humor are even less successful: "I got to go / My zebra is double-parked outside." He'll be here all week, folks.

Watch: "Ace is in the House" 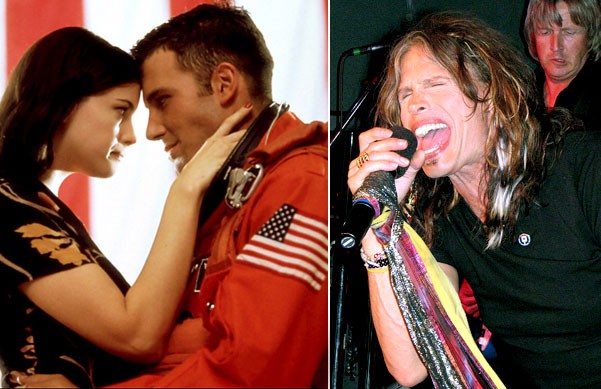 You can thank Aerosmith frontman Steven Tyler for one of the most misplaced screams in rock history: Near the end of this megahit ballad, recorded for the 1998's disaster-action flick, Tyler lets out a gibberish-filled cry that resembles a Gremlin trapped in a microwave more than it does the guy who once howled his way through "Dude Looks Like A Lady." Yet it's no match for the other hammy moments in this tune -- the orchestral arrangements and cheesy lyrics ("I just wanna be with you / Right here with you / Just like this") are about as subtle as a meteor crashing into Earth.

Watch: "I Don't Want to Miss a Thing"