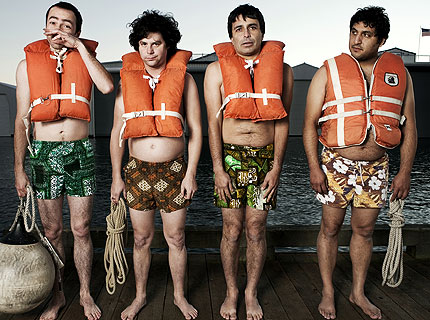 “I started to have production ideas that I wanted to do that basically required some other people,” Mercer told Pitchfork. “It’s mainly about that. It’s an aesthetic decision.”

You know what comes next — the old “let’s still be friends” line: “I’m on good terms with those guys, I hope to maintain that,” he said. “I wouldn’t say I’d never work with them again. I love working with those guys.”

From the sound of things those dudes were bringing Mercer down: “It’s a lot more up-tempo stuff,” Mercer said of the songs the new lineup already has in progress. “I haven’t really got any real ballad-y stuff right now. I’ve got 30 songs and none of them are real slow. I think maybe, I’m not so melancholy lately. I’m real happy. I’ve been lucky in love and I’ve got a wonderful kid now and things have been going well. Some of the songs are sort of aggressive in a new wave way. I’m excited about it.”

The new Shins album will be released on Mercer’s own label, Aural Apothecary, and not former label SubPop because, as Mercer explains, that way “you get more money.” A release date has yet-to-be determined. Mercer also plans to re-release the sole album from his pre-Shins band Flake Music — 1997’s When You Land Here, It’s Time to Return — which has been remixed by Danger Mouse’s mixing engineer Kennie Takahashi.