Supersuckers, Fishbone, Tommy Ramone, and more pay tribute to the late punk icon. Click here for photos and a review! 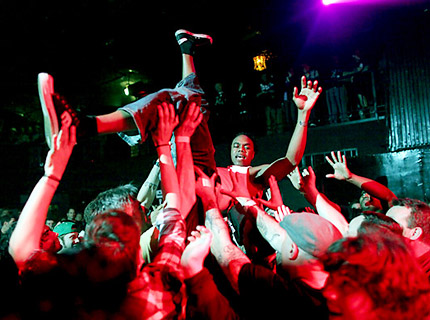 It’s not everyday that you find the Supersuckers, Fishbone, and a bunch of bagpipe players together in the same room. But then again not everyday is Joey Ramone’s birthday.

Tuesday night, the ninth annual Joey Ramone Birthday Bash brought together a slew of bands and Ramone’s family and friends for a party at New York’s Fillmore East to celebrate the life of the shy, 6′ 3″ singer who changed rock’n’roll — a life cut short by lymphoma at the age of 49, nine years ago.

After run-of-the-mill rockabilly from Tom Clark and the High Action Boys, and bland glam rock from former groupie extraordinaire Bebe Buell (a.k.a. Liv Tyler’s mother), the night finally got moving with (of all things) a folk duo known as Uncle Monk. That would be Tommy Ramone on mandolin and Claudia Tienan (of ’80s rockers the Simplistics) on acoustic guitar. The crowd — psyched to finally lay eyes on a living Ramone — sang along to “I Fought the Law” and the Ramones’ “I Wanna Be Your Boyfriend.”

An hour later, the audience thrilled to another punk icon: Death, a Detroit power trio who until recently had been known only to punk archivists, played for a New York audience for the first time since 1976. Singer Bobby Hackney showed why a seething punk anthem like “Politicians in My Eyes” — a tune he performed accompanied by his three sons, each members of the band Rough Francis — might have been the missing link between the MC5 and the Ramones.

Unexpected history lessons side, most of the night’s Ramones fans were here to see headliners Supersuckers and Fishbone. And each delivered, in equal measure, their southern-fried arena rock and manic ska-funk with no apologies (punk is largely an attitude, after all). It is very near impossible not to have a good time when Fishbone is in town, particularly when frontman Angelo Moore is just as likely to lead his band from the middle of the mosh pit as he is from the center of the stage.

It was long past midnight when the Punk Pipers — flanked by onetime Ramones drummer Richie Ramone and Joey’s brother, Mickey Leigh (drunk as he damn well pleased) — took the stage, kilts and all, to lead a dwindling audience through a “Happy Birthday” sing-along. Wherever he was, the quiet kid from Forest Hills, Queens, surely cracked a smile.