The fun-loving bassist talks about his band's reunion tour, being a Twitter guru, and whether guitarist Tom DeLonge will finally lighten up. 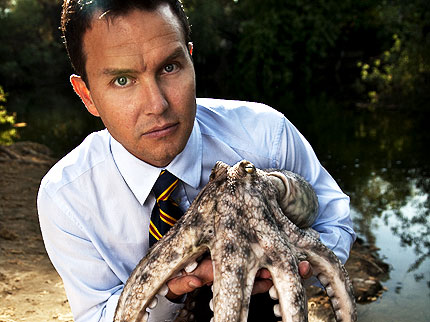 “Good morning! I’ve got 8 hours of press today. That’s a lot of me talking about me. I’m gonna start 2 hate me by the 2nd hour!”

It’s not even 7 A.M. and the Blink-182 bassist is tapping away at a Blackberry in Los Angeles, as he does every morning from wherever he happens to be, greeting some 525,000 fans who follow his Twitter feed. No, that number isn’t a misprint — and it’s likely to have grown by the time you read this.

Hoppus also spends time updating his blog, Hi My Name Is Mark, where hundreds of fans post comments on everything Mark decides to share — from Blink-related articles, to Obama videos, to SPIN’s octodrive giveaway.

This month, Blink ended their five-year hiatus and are mapping out their first summer tour since guitarist Tom DeLonge called it quits and headed off to form Angels and Airwaves. So how did Hoppus manage to stay so spectacularly popular for all those years? By being the same guy he’d always been: witty, oversharing, with an innate ability to engage and involve every fan he’s ever earned.

We carved out 20 minutes with Hoppus during one of those epic runs of interviews — “That’s my job,” he says without a hint of sarcasm, “it’s what I do” — to get his take on the budding Blink-182 reunion, their massive tour with Weezer and Fall Out Boy, and whether bandmate DeLonge has finally cheered up after half a decade of extreme seriousness.

How does it feel to be back on stage together?
Honestly, it feels like coming home. We’ve spent the past two months in a rehearsal spot, and we’re going to spend two months before the tour starts, and things are coming together really nicely. There are songs that we run through the first time and remember everything, and then there’s other songs where I go, “Wait, what did I play on bass there?”

What can you tell us about the tour’s staging?
We’re working with Mark Philips, who designed sets for Daft Punk and Kanye West and Nine Inch Nails. We had a meeting with him a few weeks ago. It’s like we’re talking to Albert Einstein about math, because it’s so far beyond our imagination. We told him that it’s really important to us that the entire arena is involved in the show. He hasn’t sent us any sketches yet, but I heard something about different areas of the stage moving in different directions or something like that. Hopefully, it’s like a punk rock Cirque du Soleil.

If I see you on trapeze I might be a little bit scared.
Travis [Barker] has been upside down flipping on his drum kit before, so there’s no telling what this guy’s going to come up with.

What about having Weezer open for you guys? Is that strange, since they broke out early and paved the way for bands like yours?
No, we’re really honored that they wanted to be a part of the tour. I remember one of the very first Blink tours, driving a van around and listening to the Blue Album on cassette and singing along with it and just being huge fans of that band. We’re really stoked to be touring with them.

They went through something similar to Blink, where they took some time off and went their separate ways before reuniting to fan hysteria…
The other night, we threw a big tour launch party and invited all the bands down to a Mexican restaurant in Hollywood. It’s always kind of strange at the beginning of the tour because you don’t necessarily know everybody, and people are in their dressing rooms, and sometimes it takes a week or two before you even see everybody. We wanted to eliminate all that and have just a big party beforehand. So we saw [Weezer] there and talked about the tour a little bit. But we didn’t really talk about the histories of our bands or anything like that. It was mostly just being excited about touring together.

I’ve heard you guys are keeping ticket prices low.
Oh yeah, totally. Throughout Blink’s history, we’ve always tried to have low ticket prices and make the shows accessible to everyone that wants to come, and on this tour we actually worked really hard with CAA, our booking agents, and Live Nation, the promoter, and we have a number of $20 all-inclusive tickets, for all the shows. And that includes parking. There’s no service fees, no hidden charges, so you’ll get into a show with 20 bucks.

You’ve got Daft Punk’s set designer creating crazy things and you’re only charging $20? Are you going to make any money?
For us, this isn’t one of those reunion tours where the band is hurting for money and they go out on tour and play the hits, then come home, take a bunch of time off, and maybe do another reunion tour a few years later. It’s more about us having a fun time this summer than making a bunch of money. And we’d rather play for 20,000 people and not worry about making as much money than gouge our fans.

There’s been a lot of talk about whether you’re going to release a new Blink-182 single.
Well, we’ll definitely play at least one or two new songs on the tour, but I don’t know yet if the single’s going to be released. Ideally, I would love to have a single come out around the time we’re going to be going on tour, just so people have a little taste of the new music and can enjoy it at the show. New songs at shows always seem a little weird. When I go and I see a band play and they’re like, “We’re going to play some new stuff now,” I just go, “Oh my God, for real?” I just want to rock out with the stuff I can sing along with. So I would love to have a single out beforehand.

You do so much online with your fans. Will you get them involved on tour, too?
Yeah, definitely. We haven’t decided on anything yet, but we always try to let people into the soundchecks, and we try and do meet-and-greets. Our whole thing, as part of the live show, is to eliminate the separation between the band onstage and the audience watching us. I think that Blink has always had this feeling that we’re all in this together, that the audience wasn’t a separate thing. We want everyone to feel like they’re part of the show in some way. Do not be surprised if all of a sudden we’re playing right next to you.

Seriously, you have half a million people following you on Twitter. Why?
Pete [Wentz of Fall Out Boy, 561,000 Twitter followers] and I have been trying really hard to make things cool. We’re not guys that feel like we’re above anybody because we’re in a band. Especially in Blink, we’ve always recognized the fact that the only reason we get to do what we do is because people support us. It breaks my heart when I see bands that don’t interact with their fans and think that success is deserved, rather than it being a wonderful blessing that people support your band.

One last thing: Is Tom ready to not be so serious?
I think even more so than people realize. Because Tom has been such a serious artist for the past five years, he has about five years of obscenities backed up in his system. Given a microphone and an audience in front of him, I think he’s going to say so many out-of-line things that I’d like to apologize in advance for my friend.