The Jane's Addiction frontman is recovering in Atlanta. Click here for details. 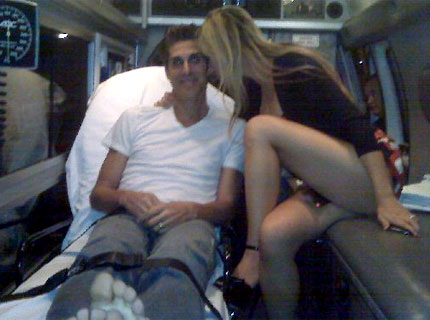 Jane’s Addiction’s Perry Farrell is an energetic showman, but Sunday night the singer’s antics cost him. During the first song of the reunited band’s set at Atlanta’s Lakewood Amphitheatre, Farrell tore his calf muscle. The quartet managed to finish their set, but Farrell was rushed to the hospital in an ambulance shortly thereafter, Billboard.com reports.

Doctors have advised Farrell to stay off his leg for several days, but the rocker and the rest of boys — drummer Stephen Perkins, bassist Eric Avery, and guitarist Dave Navarro — plan to continue with the tour Tuesday night in Austin, TX.

The band, playing with its original lineup for the first time in 18 years, are currently on tour with NIN. Farrell and Co. warmed up for the North American jaunt this March with a secret show at SXSW. Check out a photo gallery of the performance here.