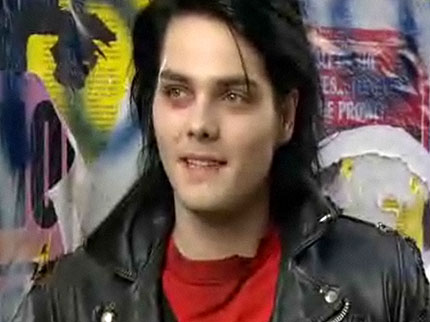 Anyone familiar with Gerard Way’s band My Chemical Romance and their proclivity for the concept album (see: 2006’s The Black Parade)knows the guys are suckers for a theme.

So when Way’s brother and bandmate Mikey Way announced via Twitter yesterday that Gerard and his wife, Lindsey, had welcomed their first baby, a girl, and named her Bandit Lee Way (all of which, plus the newborn’s birth weight of 6 lbs., 5.6 oz., has been confirmed to SPIN.com by the band’s publicist), it seemed likely that there was some sort of explanation behind it. Because, you know, those emo types love to plant personal meaning wherever they can — and their kids’ names are no exception. Just ask Bronx Mowgli Wentz!

And then we recalled something Gerard Way said — while talking about the band’s next album — about how the group really digs that “classic, late-’70s” vibe in their music. So maybe he also digs Burt Reynolds’ mustache from the classic, late-’70s flick Smokey and the Bandit?

Mystery solved, right? Not exactly. When we used high-tech Internet search technology to link Way to the word “bandit,” we uncovered a bizarre story: A little over two months ago, the MCR frontman placed a public ad seeking a new car that included this stipulation: “I absolutely do not want gold, brown, or that frigging Smokey and the Bandit car — that shit is whack.”

Like, whoa? It seems doubtful that Way would want his baby’s name to be associated with something whack, but whatever — we’re tired of Googling! Congratulations to the happy family!