M.I.A. Hangs Out with Oprah!

The Sri Lankan "Paper Planes" star meets the Queen of All Media -- and blogs about it! 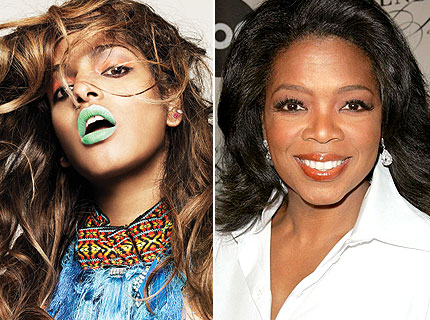 Ah, the life of M.I.A.: rocking out at the Grammys while pregnant, running a fashion line — and kicking it with Oprah!?!

That’s right, the Sri Lanka-raised, London-based star — and former SPIN cover subject — rubbed elbows with the media overlord at Tuesday night’s Time 100 gala in New York City. The event celebrated those who made the magazine’s yearly list of the 100 most influential people — which this year includes M.I.A. “She said she liked my jacket from the magazine (the one my brother got for me from the side of the street at SXSW ’09),” M.I.A., a.k.a. Maya Arulpragasam, wrote in a post on her MySpace blog. “She squeezed my hand so hard, I was convinced she cared.”

And M.I.A. almost made a political gesture at the event, but thought better of it. “Michelle Obama gave a speech and there was mad secret service in the air so I didn’t get to throw a paper plane at her saying, ‘Stop the bombing of the Tamils in Sri Lanka.”

“I saw Tavis Smiley,” she added of the PBS news host. “I said thanks for sticking your neck out and being a real journalist, his program was the first program to voice the truth about what’s going on in Sri Lanka, without fear of consequences.

To read the complete blog entry and check out a WTF-worthy picture of M.I.A. and Oprah, click here.