"I'd rather have someone read my diary than look at my iPod," says The Office star. Read our Q&A. 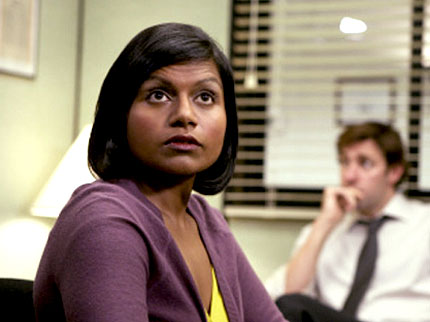 What was the last concert you went to?
I saw the Arcade Fire and LCD Soundsystem at the Hollywood Bowl last summer. I don’t mean to be the douche bag that says, “The Arcade Fire were transporting!” But they were transporting. And I was only there because I have a big crush on [LCD’s] James Murphy, but I was like, “I can get behind this 116-member-band thing.”

What’s your favorite album?
Graceland is the album that I have bought more times than any other. When I was a little kid, my parents introduced me to Simon & Garfunkel, so that was the music I assumed everyone listened to. From the ages of six to 26, I forgot about it, and then I rebought it recently, and it’s like a different album. It makes me bawl.

Growing up, did your parents object to anything you were listening to?
“Weird Al” Yankovic. I remember when I got “Smells Like Nirvana” on cassingle, they were like, “This isn’t right. He should be creating music, not parodying it.” For them, Weird Al was the musical equivalent of Married…With Children. It was disrespectful.

Who comes after U2 on your iPod?
The Vince Guaraldi Trio. It’s the Charlie Brown Christmas album. In fact, it goes Tony Bennett, U2, Vince Guaraldi. You’d think my iPod was programmed by a 60-year-old man.

What’s your dream concert lineup?
Jenny Lewis and Liz Phair together. [Rilo Kiley’s] “Portions for Foxes” and [Phair’s] “Fuck and Run” are smart, fucked-up songs about making terrible mistakes with men in your mid-20s. I’m attracted to that.

Who on The Office has musical taste that’s most similar to yours?
I’d say my best friend, [writer-costar] B.J. Novak. We both can talk at length about why we like Justin Timberlake a lot.

Why is that?
That’s like asking, “Why is God great?” He’s so hot, he’s funny, and he can dance in a three-piece suit. He’s the complete package. It’s almost infuriating.

What music do you run — or fast-walk — to?
I fast-walk to Usher, I run to M.I.A., and I cool down to the Indigo Girls. You haven’t cooled down till you’ve cooled down to “Closer to Fine.” And it’s political, too, so you’re like, “Ooh, I’m a good person.”

Name a mix on your iPod.
I have lots. There’s “Songs to Make Out To” and “Songs to Knock Boots To.” There’s a lot of Nada Surf on the make-out mix, but there’s more hip-hop on the sex mix, like Flo Rida. It depends on the tenor of the session. I’m going to stop talking now.