Paul Banks is prepping his debut album under the moniker Julian Plenti. Click here for details! 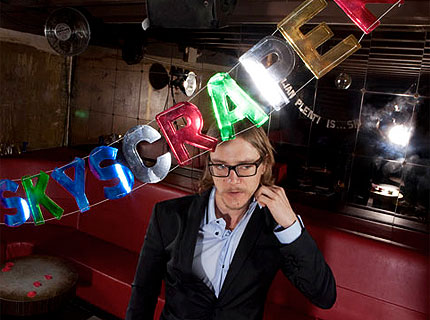 While Interpol bassist Carlos D investigates the “psychosis of celebrity” in his new film, frontman Paul Banks has been staying busy — prepping his debut solo album under the name Julian Plenti!

According to a source cited by Billboard, Banks has written and performed under the Plenti name for several years. His album, titled Skyscraper and due out August 4, was recorded recently, though some of the songs were written more than 10 years ago. Billboard’s source described the record as sounding “cocky, sexy,” adding that it also comprises tracks similar to Interpol as well as “straight-ahead rock songs.”

Plenti (Banks, whatevs) has also launched a website, which features only a logo, a few photos, and looping song samples. Check it out here. More details can also be found in the February 2002 issue of online ‘zine Beekiller, which described Plenti as an “insouciantly louche downtown songwringer.” Three live songs are offered as MP3s — “On the Esplanade,” “Cellophane,” and “The Larynx That You Have.”

Is all this making you miss Interpol the band? Fear not: There’s always that “vital” next album they’ve been working on.