The Gossip Are Back — Live From London 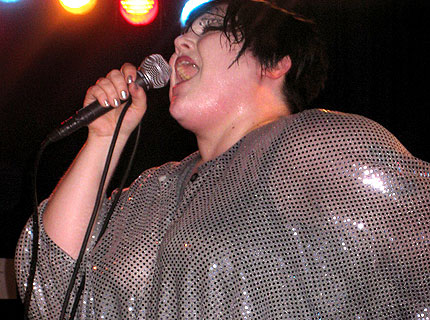 The Gossip’s Beth Ditto kicked off her band’s sold-out return show at London’s Scala Thursday night with a victory leap. Bounding onto the stage as Fleetwood Mac’s “The Chain” blared through the house system, Ditto jumped straight into the audience, into the arms of adoring British fans who’ve embraced the Portland, OR, dance rockers as bonafide superstars.

Once she’d rejoined guitarist Brace Paine, drummer Hannah Blilie, and bassist Chris Sutton on stage (and consulted with the audience to ensure her friends had made it in), Ditto got things going with new song “Pop Goes the World,” a fitting tune to match her decidedly eye-popping silver sequin mini-dress and bedazzled Liza Minnelli eyes.

“These are all new songs that you won’t know but that’s okay,” she told the crowd, offering guidance as to how to cope by illustrating the semi-interested head bob popularized by hipsters the world over. “Just do this. Just look cool, it’s not hard!”

She certainly does make it look easy: The indefatigable frontwoman swings from drawling ingénue to wailing evangelist in the span of a glittering blink — though, admittedly she does break a sweat. “I’m on fire!” she announced early in the set.

New single “Heavy Cross,” off the band’s forthcoming album, Music for Men, proved a show highlight, with a guitar riff that evokes classic Queen with a touch of “Eye of the Tiger,” and Ditto’s trademark snarl bearing a hint of Dolly Parton twang. The propulsive tune that guitarist Brace Paine described to SPIN.com as “Donna Summer singing a Bauhaus song” whipped the crowd into a revival-like frenzy: Fans reached outstretched arms to Ditto in the hopes of receiving dance punk salvation.

After using up their biggest hit, “Standing in the Way of Control,” as the set-closer, the band turned to an unexpected cover to open their encore. “We’re playing this song because we forgot how to play other songs,” Ditto said as the band broke into Aaliyah’s “Are You That Somebody.”

She then launched into fan favorite “Listen Up,” charging into the crowd once again with only her microphone cable keeping her tied to the stage.

Seemingly reluctant to leave the party, Ditto closed out the night with one last rallying of her troops: “It’s sing-along time!” she enthused from the back of the room, before easing into a seductive, acoustic rendition of Tina Turner’s “Private Dancer.” And while the curtain drew with Tina’s parting lyrics, “Any old music will do,” the Gossip proved nothing could be farther from the truth.

Melissa Goldstein
Tags: the gossip, We Were There