He might not be a "real" DJ, but Gregg Gillis still blew the roof off Thursday night's Canon/SPIN soiree. Click here for a review! 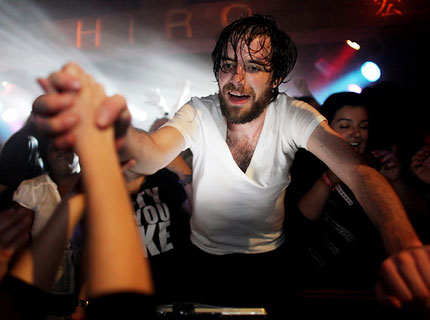 “Girl Talk: I’m Not a DJ” flashed the giant video screens next to the stage at NYC’s Hiro Ballroom Thursday night. And yet, there was GT’s Gregg Gillis front and center, surrounded by a crush of sweaty twenty-somethings dancing to his dizzying mash-ups of Top 40 radio and kitschy classics.

(See a photo gallery of the show here.)

We can forgive Gillis his one moment of ironic self-awareness. Everything else about his set screamed sincerity — from the massive, blinking beach balls he unleashed on the audience to the grin on his face when he knew he’d played their favorite guilty pleasure.

In other words, it was a total, unqualified blast for a packed-to-the-gills house of invited guests and 250 contest winners at the private Canon PowerShot/SPIN event. Dressed for debauchery, with a gratis Absolut vodka in one hand and a smartphone in the other, the crowd turned Hiro — faux Japanese décor and all — into a dance club fit for (ahem) a real DJ.

Then within minutes of Girl Talk’s triumphant arrival, the stage was packed with Gillis’ new best friends — 25 of whom earned PowerShot cameras and the chance to dance onstage by submitting their best concert photos — each angling to snag a photo of themselves next to their beloved DJ.

Try as we might, keeping track of Gillis’ source material was nearly impossible. There was that fantastic opening run: Youngbloodz’ “Damn!” (“Don’t start no shit, won’t be no shit!”) over Modern English’s “Stop the World” running head first into Lil’ Wayne rhyming over Weezer’s “Say It Ain’t So.”

There was the obvious: Kelis’ “Milkshake,” MGMT’s “Kids.” And the not so obvious: The Toadies’ “Possum Kingdom,” Don Henley’s “Boys of Summer.” And there was the plainly hilarious: Little Michael Jackson singing over Kia’s “My Neck, My Back.”

Every time a Jay-Z beat dropped or a Kelly Clarkson chorus kicked in, Gillis was up and jumping, his hands in the air, his beard drenched in sweat. “Party till you puke” read a fan’s t-shirt.

By midnight — when the party finally wound down with a Journey sing-along — we’re sure someone had taken that advice to heart.