Watch a clip from the industrial band's new documentary about their final concerts! 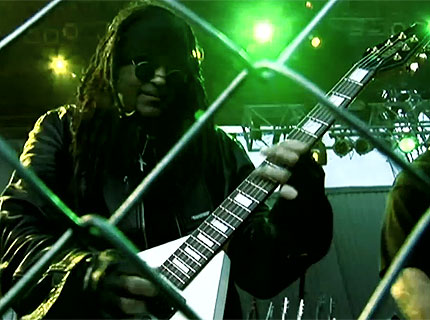 After 25 years and eleven studio albums, industrial-metal pioneers Ministry called it quits in 2008 with their final world tour, dubbed the “C U LaTour.”Missed out?No sweat — frontman Al Jourgensen and his revolving band of speed-metal freaks are releasing a double-disc DVD set, Adios, Puta Madres, on May 26 through Jourgensen’s own 13th Planet Records.

Adios, Puta Madres will feature live performances, backstage footage, band interviews, and a 45-minute “rockumentary” following the band from the first rehearsal to the last show in the “C U LaTour” — and SPIN.com has an exclusive clip for your viewing pleasure!

Below, see band members talking about intoxication and dead skunks — and a searing performance of “Just One Fix,” from the band’s fifth album, Psalm 69: The Way to Succeed and the Way to Suck Eggs.