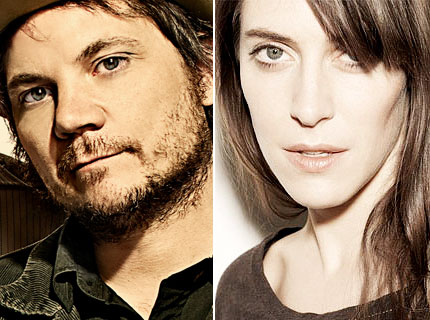 Wilco and Feist have teamed up to record a cover of Woody Guthrie’s Depression-era song “The Jolly Banker.”

The remake came about at the request of Guthrie’s daughter, Nora, who approached Wilco with the idea. “[She contacted us] a couple of months ago when things really started to get hairy financially and economically for the country,” Wilco frontman Jeff Tweedy said in a taped interview for the show Marketplace. “That song had begun to get a little bit of attention. And she felt like somebody was going to cover it. And she called us because she wanted it to be us.”

Feist is credited with providing percussion on the tune, which finds Tweedy reprimanding banks for ripping people off. The song is currently available for free, but Wilco has requested fans donate a minimum of two dollars to download the song. All proceeds will benefit the Woody Guthrie Foundation and Archives.

“We enthusiastically support their good work in promoting and sustaining the legacy and music of Woody Guthrie,” the band said.

Feist also duets with Tweedy on the song “You and I,” which will appear on Wilco’s forthcoming album, Wilco (The Album).