Chris Brown: “I Ain’t A Monster”

WATCH: The embattled R&B star speaks out from Shaq's crib. 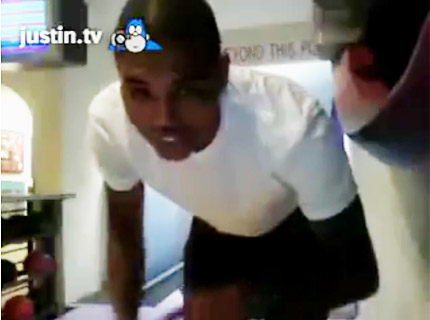 R&B singer Chris Brown has taken to YouTube to make his first public comments since his alleged assault of pop star Rihanna in February.

The message of the video blog: Brown is not a monster, but rather, is someone who is friends with Shaq and Bow Wow, enjoys bowling, and has a new album to promote.

“I just wanna say ‘what’s up?,’ because I ain’t been out there in a minute,” Brown says in the clip, which, according to MTV, was filmed at NBA star Shaquille O’Neal’s house (in his private bowling alley, no less).

He then cuts straight to the chase: “The new album is gonna be coming soon. We working on it right now. It’s called Graffiti.”

Further validating the rumor that Brown may be flirting with a “country sound,” he asks fans to keep an open mind about his new material: “It’s got everything on it, so y’all be ready for that.”

The singer goes on to say that he expects the first single to be released this summer. Then he turns to personal matters: “We ain’t going nowhere. Everybody that’s haters, they just been haters. All my real fans, I love you. I ain’t a monster.”

Rapper Bow Wow, who appears in the background of the video, chimes in his support: “Believe that!”