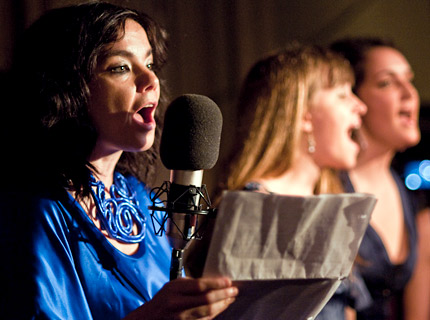 It was the night of a thousand shooshes.

And with good reason. This past Friday’s intimate benefit show at Housing Works bookstore in New York’s Soho neighborhood was an acoustically nuanced, elaborately voiced performance by the Brooklyn-based indie-rock theoreticians Dirty Projectors featuring pop’s most likable experimentalist, Bjork. And everyone — most of all the patrons who paid $100-$400 a ticket — wanted to hear every carefully composed strum and croon and otherworldly hocket (listen here). So they shooshed.

The unplugged evening — instigated by Stereogum.com writer Brandon Stosuy after he discovered that Björk and Dirty Projectors leader David Longstreth were fans of each other’s work — was divided into three sections. First, the two principals chose opening acts: Björk tapped fellow quirky Icelandic singer Ólöf Arnalds (who has performed with Múm and Mugison, among others) and Longstreth selected singer-guitarist Kurt Weisman (a member of avant folkies Feathers and J Mascis’ doom metal crew Witch). Weisman, a stylishly goateed wraith with two dangly gold earrings, was barely perceptible, as he seemed to channel an ancient British nanny warbling her charges off to slumber. Much shooshing.

Introduced by Bjork (who wore an inexplicable green satin shawl), Arnalds followed, and she was sort of a campfire version of her benefactor — full of precious childlike wonderment alongside varied instrumentation (acoustic guitar, violin, ukelele), singing about life and death and pregnancy and summer nights, the highlight being a Caetano Veloso cover. “We are becoming friends now?” she asked. Oh, okay.

Meanwhile, the increasingly lubricated crowd was warming to the task of spotting musical “celebrities” amongst the crowd of 300 — M.I.A., David Byrne, St. Vincent, Evanescence singer Amy Lee(!), members of Vampire Weekend and the National. All right, so it wasn’t an Us Weekly field day, but still, a lively turnout, which reportedly raised upwards of $40,000 for Housing Works’ efforts to assist homeless, HIV-positive New Yorkers.

Finally, Dirty Projectors took the small stage, with Longstreth on acoustic guitar, Nat Baldwin on upright bass, and the three true stars of the evening — female singers Amber Coffman, Angel Deradoorian, and Haley Dekle, whose bold harmonies and lead vocals make the Projectors new album Bitte Orca (officially out in June) one of the most compelling of the year so far. The group played four songs from that record, with Bjork (after changing into a bright blue gown), seated on the floor at the ladies’ feet, and the rest of the crowd rapt, no need for a shoosh. Opener “Cannibal Resource” missed its electric guitar splashes and limber percussion, but the vocal arrangement was so stunningly immediate that Longstreth’s jittery, cardigan wails about “the arbitrary life” felt like mere filigree.

A lot of outrageous claims have been made in indie-rock’s geekiest sanctums about Longstreth’s genius in past years. A Yale music composition grad who voraciously critiques pop music, from Black Flag to grunge to Prince to Beyonce and beyond, he talks a good game about how, over a series of albums and EPs, he’s interpreted and tweaked and integrated these disparate influences into his own ADD, time signature-shifting, precociously noisy, occasionally sparkling blurts. Problem is, to anybody who’s not interested in music that sounds overtly difficult and restlessly intellectual, most of the shit is fairly unlistenable. People I respect claim that the Projectors’ loose reimagination of Black Flag’s Damaged is possibly even more punk than the original, but when I hear it, I’m left, as the lyric goes: “Thirsty and miserable / Always wanting more.”

But with Bitte Orca, Longstreth delivers a reinvention of his sound (and indie-rock in general) that’s both subtle and startling. As a cheap reference point, imagine a sound that vaguely recalls Vampire Weekend (VW leader Ezra Keonig was an early Projector), yet more rhythmically and sonically far-reaching, as well as more passionate about pure pleasure, paired with vocals that turn African, classical, and modern R&B styles into something freaky, folky, and fun. I don’t know if it’s genius, but it shows a remarkable ingenuity and devotion to detail. And Bjork, for one, is clearly impressed.

For the evening’s third section, Longstreth wrote a suite of six songs that he said were inspired by a trip that he and bandmate Amber Coffman took to Mount Wittenberg in northern California, where Coffman saw a whale and the whale eerily appeared to stare back at her. The music tried to capture such a rare, fleeting moment, when time and nature seem to slow for a moment, and you’re able to calmly absorb the joy and fright of life’s enormous ebb and flow. As the three female Projectors sang phrases like “on and on and ever onward” with a choir-like complexity, or traded quick phrases that sounded like hiccupping cartoon characters (or a particularly adept microhouse DJ), Bjork sang more straightforwardly, in a lower register, like a womanly voice of experience, anchoring and deepening the emotion.

At one point, she voiced the simple line, “We looked in each other’s eyes” and it felt both magical and heartbreaking. Bjork only performed on three of the six songs, and some expressed disappointment there was no encore (Dirty Projectors have covered her “Hyperballad” in the past), but it was hard to quibble with a benefit show so adventurous. When Stosuy, the evening’s MC, said the performers were too “spent” to continue, everybody filed to the front with minimal beef.

Postscript: But Longstreth and Bjork looked completely refreshed (lucky for us in attendance) hours later, when they DJed at the Penthouse bar of the Cooper Square Hotel on the Bowery. Punching up songs on their laptops, they made a strong case that the most breathtakingly inventive genre/period of popular music in the past decade or more was female-sung R&B circa 1998-2003, from, say, Aaliyah’s Timbaland-produced “Are You That Somebody” to Amerie’s Rich Harrison-produced “1 Thing” (sorry Radiohead and White Stripes). Bjork dropped in some Malian kora and Longstreth blasted Bad Brains’ “Pay to Cum” at one point, but the proof was in the only song that was played twice, Destiny’s Child’s “Say My Name,” which if slowed down and rearranged, could be a dead ringer for Dirty Projectors’ new single “Stillness Is the Move.” One can almost see Longstreth at home, daydreaming that his trio of female singers is his own Destiny’s Child, and he’s the nervy, lo-fi version of Timbaland or Harrison or Rodney Jerkins, et al.

Charles Aaron
Tags: bjork, Dirty Projectors, We Were There