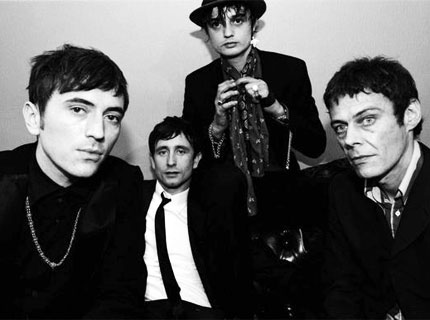 Pete Doherty’s band Babyshambles are channeling Britpop legends Stone Roses on their new album, due out early next year.

“The songs we have done so far are pretty groove-based, like early Stone Roses,” drummer Adam Ficek told UK tabloid The Daily Star. “It’s less straightforward rock’n’roll and punk. It’s a bit more beat-driven. Some of the stuff coming out was sounding like “Fools Gold” [Stone Roses’ 1989 song], which is pretty amazing.”?

But Ficek was quick to point out that for Babyshambles, “amazing” does not equate to “time-intensive.” ?”As normal, we won’t spend long making it,”he said of the follow-up to 2007’s Shotter’s Nation. “It’s all thrown together in scraps whenever we get a chance.”

One thing they do seem to be putting a bit of effort into, however, is a bid to open for Blur at their upcoming reunion shows. Blur axeman Graham Coxon recently collaborated with Doherty on his solo album, and Doherty took the opportunity to try to cash in on the connection.

“Peter grabbed Coxon on the bus and asked to support them and he was like, ‘All right, I’ll call the manager,’ but nothing ever came back,” Ficek said. “Blur appeal across the board and we might be a bit risky.”

Still, in light of Doherty’s recent drug rehab, the band seems to be getting less-risky by the day: “I think Peter being healthy will definitely benefit our album,” Ficek enthused.