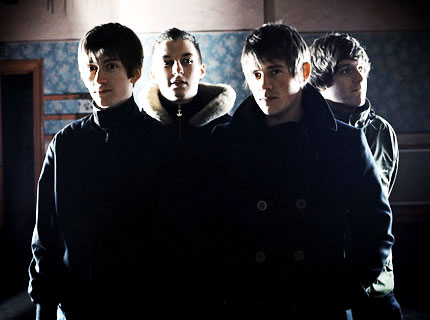 When they’re not monkeying around with P. Diddy in his Miami mansion (and filming the whole thing!), Brit indie rock darlings the Arctic Monkeys are recording their new album for release this summer. Thankfully, the boys haven’t let their excursion in the Diddy’s hop-hip universe affect the recording sessions — in fact, they’ve found inspiration in something much heavier: metal titans Black Sabbath!

Frontman Alex Turner told NME.com how a performance at last year’s Latitude festival in Sheffield, England, led the quartet to include some metal riffage on their new record: “We went to Latitude, ripped it up… and eventually wrote some songs.We spend the first day there on the most complicated riff you’ve ever heard. It goes round in 7/2 time. It was like Black Sabbath.”

Let’s just hope that Turner doesn’t start biting the heads off of pigeons any time soon.

Arctic Monkeys unveiled “Crying Lightning,” a track off their new album, live this past January at Australia’s Big Day Out festival. Watch footage of their performance here.