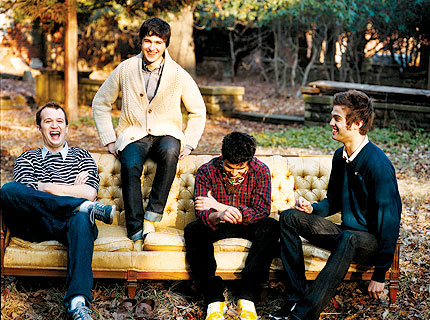 Indie sensations and former SPIN cover boys Vampire Weekend are hard at work in Brooklyn, NY, recording their sophomore album for a tentative September release. And according to frontman Ezra Koenig, they’re expanding upon their tropical Afro-pop stylings.

“There are going to be new sounds,” Koenig told Entertainment Weekly of the album, which will be produced by the band’s own keyboardist, Rostam Batmanglij. “We’re trying to challenge ourselves not to use the same bag of tricks that we used on the first album — different instruments, stuff like that.”

Meanwhile, Batmanglij has been keeping busy with a new side-project as well: He moonlights as one half of electro-R&B band Discovery, which features Ra Ra Riot’s Wes Miles on vocals. Click here to check out Discovery tunes “Orange Shirt” and “Osaka Loop Line.”