Two Days with the Dead in NY

Home » News » Two Days with the Dead in NY

He might be right. More than 40 years into a career in which they defined the psychedelic Haight-Ashbury scene in San Francisco, and then became rock’n’roll’s most eclectic touring phenomenon, the Dead are still going strong. The Long Island show is part of the band’s “reunion” tour, their first outing since 2004, when they began touring as “the Dead,” a truncated version of “the Grateful Dead,” a name they retired after the death of guitarist/vocalist Jerry Garcia in 1995.

Click to Enlarge! Photo by Jay BlakesbergNow with Allman Brothers/Gov’t Mule guitarist Warren Haynes filling in for Garcia, and Jeff Chimenti on keyboards, the band sounds fresh, lively, and just as relevant as ever — just ask the 17,000 fans packed inside the coliseum. Or thousands more in the parking lot, index-fingers raised high hoping for a “miracle” — a free ticket to musical salvation. 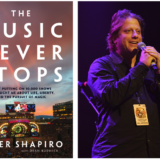 Friday’s show was a testament to the band’s storied versatility. They opened with the loose country groove of “Jack Straw,” shifted to the proggy guitars and jazzy bounce of “Saint of Circumstance,” and found moments of poignancy on a cover of Bob Dylan’s “Knockin’ on Heaven’s Door.” It was like Weir was singing directly to Jerry. As the crowd sang along on the chorus, hundreds of multi-colored glow sticks came raining down from the rafters like fireworks.

From the otherworldly sounds Hart coaxed from his “beam” — a unique stringed instrument played with a mallet — to Haynes’ countrified riffs, and beyond, it was certainly an eye-opening show, especially for a first-timer. And it was all the coercion I needed to see the Dead again on Saturday night at Manhattan’s Madison Square Garden — a venue the band has played more than 50 times.

With no parking lot to inhabit, tie-dyed Deadheads dotted Midtown Manhattan. The sight of a vintage Volkswagen bus on 32nd Street, as two businessmen in suits stood nearby, making jokes at its many bumper stickers, was especially affecting.

For fans, it’s simple — they love this band. The Dead’s following is second to none; they trail the band everywhere. They trade bootlegs. Argue the merits of set lists, songs, verses, choruses, lyrical meaning, et al. They name their daughters “Ramblin’ Rose.” And yes, they certainly like to get high. But so do 20-year-olds in bathroom stalls at a Titus Andronicus concert. And Deadheads’ devotion to their band makes the hipsters who sacrifice a few hundred dollars and a few nights of sleep for SXSW look like amateurs.

Click to Enlarge!Photo by Jay BlakesbergInside the Garden, people are dancing. Haynes is singing and fingering the funky riffs of “Shakedown Street,” commanding Garcia’s celebrated tune like he wrote it himself. Lesh, stage right, opposite Haynes, guides the crowd’s hips with fat bass licks. Later, the band push the crowd to their wildest with an unhinged take on “Sugaree,” Haynes and Weir trading riff for riff, as Chimenti pounds out the saloon piano tune over the backwoods rhythms of Hart and percussionist Bill Kreutzmann (known collectively as the “Rhythm Devils”). One of the set’s final songs, a cover of the Rolling Stones’ “Gimme Shelter,” was met with equal enthusiasm — fans went nuts. Different sections of the stands, once regulated by bouncers, now overflowed into one another. This elation couldn’t be contained.

The whole weekend, from Friday afternoon to late Saturday night, was filled with the same vibe. The night before, backstage at Nassau Coliseum, a troupe of “friends and family” arrived to chat with the band. It was a reunion of sorts. One woman brought her son. With gauged pierced ears, a fedora, and tight jeans, he looked like he could front any number of bands from New Jersey’s hardcore scene. And he was just as excited for the show as any pony-tailed 50-something in the crowd out front. Another woman, a longtime confidant of the band, now in her 60s, surveyed her environment and said, “Wow, it really has been a long strange trip hasn’t it.”