PHOTOS: "It's something that no other band has done," Mark Hoppus says of the reunited trio's video project. Click here for more! 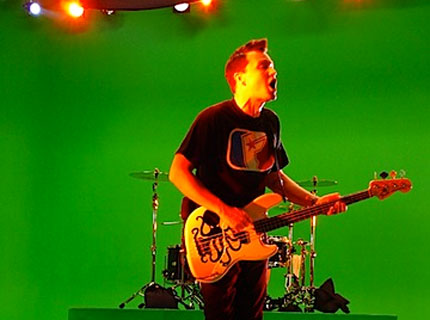 For the first time in six years, Blink-182 are up to something… something very interesting.

In a recent post to his blog, bassist/vocalist Mark Hoppus unveiled a series of photos showing the band performing in front of a green screen. It’s the first time the trio has been photographed together, behind their instruments, since announcing their official reunion at the Grammys. But what’s up with these photos? Is this a music video for a new song, as scores of fans speculate online? Not sure. It’s a mystery. But Hoppus, without spoiling the surprise, does provide a few details.

“It’s definitely not what it seems to be,” Hoppus told MTV.com. “It’s not really a music video shoot, and it’s not really a movie shoot. It’s something that no other band has done, and the technology behind it is ridiculous. I don’t even know how to explain it.”

Check out the photos from Hoppus’ blog.