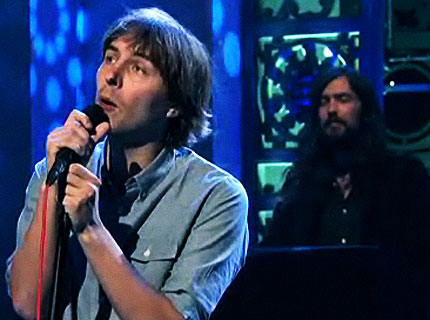 Knocked Up funnyman Seth Rogen hosted last weekend’s episode of Saturday Night Live and provided plenty of laughs. But it’s not his wise cracks that are the talk around the water cooler this morning — it’s French pop-rock band Phoenix’s exuberant performance of two songs. Watch below.

The six-piece group — dressed in trendy button-up Oxfords and tight jeans — ripped through “Lisztomania” and “1901,” tracks with ringing guitars and buoyant rhythms, from their upcoming album Wolfgang Amadeus Phoenix (out May 26). Over the past 24 hours, word of the powerful performance has become talk of the web, with everyone from Huffington Post to SPIN’s Uncle Murray (and Aunt Sadie) saying great things.

You may know Phoenix from the song “Too Young,” their contribution to the movie Lost in Translation, which was directed by frontman Thomas Mars’ partner, Sofia Coppola. The couple met when Mars contributed vocals to Air’s “Playground Love” for her film The Virgin Suicides.

Below, check out video of Phoenix’s performance. And be sure to set your TIVO: Yeah Yeah Yeahs play SNL Saturday, April 11.