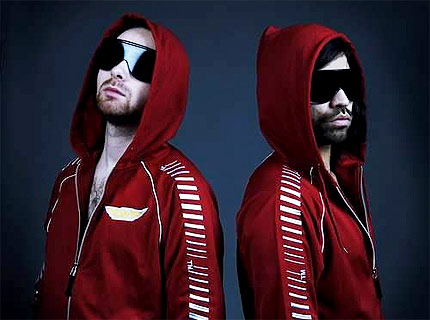 Master trains apprentice; apprentice praises master: Such is the scenario for funky Norwegian duo Datarock, who are paying tribute to New York genre-benders Talking Heads with a dancetastic new song!

“True Stories,” a track off Datarock’s sophomore record, Red (due September 1), should certainly warm the hearts of David Byrne and Co. During three upbeat minutes, vocalist Fredrik Saroea rattles off Talking Heads song titles — “Houses in Motion,” “Don’t Worry About the Government,” “Once in a Lifetime” — in an airy yelp not unlike that of Byrne himself. The song — which take its name from Talking Heads’ 1986 album and Byrne-directed film — dishes out stabs of guitar, drums, and synthesizer that recall TH’s landmark 1980 release, Remain in Light.

“True Stories” will also be available on a new Datarock remix EP, out on iTunes May 19.

Listen to the track below. Then leave your thoughts in the comments section.