Watch the music video for "Ayo," a track from Blackout 2, the hip-hop duo's first release in 10 years! 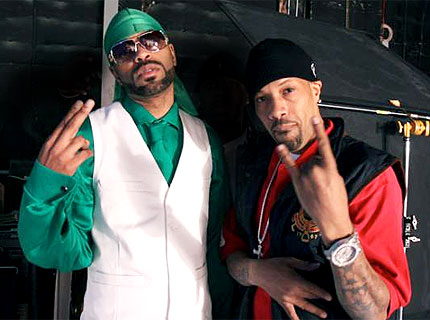 Patience is a virtue.

10 years after the release of Method Man and Redman’s classic album, 1999’s Blackout!, the blunt-smokin’ hip-hop duo have finally unveiled Blackout 2 (out May 19).

But why the decade-long wait?

“I had obligations. Doc had obligations. There were things going on [with] the label. Staff changes,” Method Man told MTV.com of the album’s delay. “We were venturing, starting other careers. We can’t just depend on this rap game. We did a movie, TV show — venturing out. Now we back. We ain’t left. We’re coming at the right time.”

The pair leaked the music video for the song “Ayo” yesterday, and just finished a clip for “Miss International,” which is expected to drop soon. “We’re dedicating [the song] to the women, whether you’re fat, ugly, skinny — it don’t matter. You’re all beautiful inside,” Redman said of “International.”