How Mastodon endured multiple traumas to create the album of their lives. 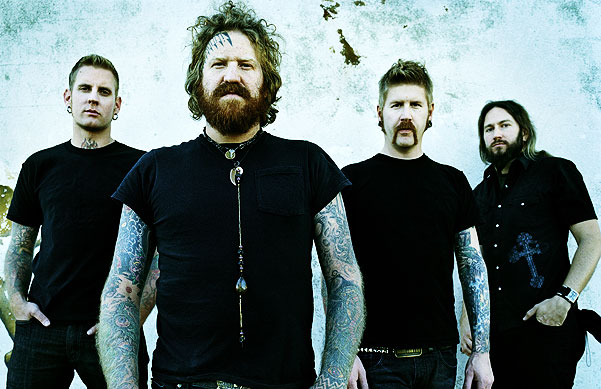 “Has anyone seen Brent?” It’s 1:30 on a cold, rainy Friday afternoon in late February. The members of Mastodon had planned on meeting a half-hour ago at El Myr, a colorful, run-down Mexican cantina that serves as unofficial HQ for the band here in their hometown of Atlanta. Drummer Brann Dailor is less on the hunt for his missing bandmate than he is bemusedly giving voice to Mastodon’s semipermanent state of being. Guitarist Bill Kelliher, who worked at El Myr in Mastodon’s early days, is at the bar with his wife and young son. Dailor and bassist-vocalist Troy Sanders are chatting with friends about tomorrow night’s show, a daylong outdoor metal festival the band will headline. Guitarist-vocalist Brent Hinds is nowhere to be found.

An hour later, Hinds ambles in, offering a wave and a sleepy smile from beneath his grizzled, reddish beard. His gut, barely covered by a blue, long-sleeved T-shirt, hangs over a pair of tattered black jeans, and for some reason, he’s wearing a fingerless white driving glove on his left hand.

“Sorry I’m late,” he says, taking a sip from the Tecate someone has already plied him with. “I was sure it was 3:00 when we were supposed to meet. I thought I was early.”

At around 6:00, the band members head to the Masquerade Music Park to soundcheck for the show. It’s their first real performance in support of their new, Brendan O’Brien–produced album, Crack the Skye. When they arrive, the California stoner-metal outfit High on Fire are onstage going through their own warm-up. Hinds first met HOF frontman Matt Pike in the late ’90s when Hinds and Sanders’ former band, Four Hour Fogger, opened for High on Fire.

“Matt and I ended up doing mescaline and playing Street Fighter for 27 hours,” Hinds recalls. “Now he’s one of my best friends.” Later tonight, the two best friends will drunkenly slug it out on the sidewalk outside El Myr after Hinds accidentally knocks Pike’s beer from his hand. (“It was just dude stuff — he clocked me in the eye, I hit him in the ear,” Hinds laughs.)

Mastodon owe High on Fire a debt for their very existence. It was at a High on Fire gig in 1999 where Hinds and Sanders met Dailor and Kelliher, both of whom had recently relocated from Rochester, New York, where they’d played together in several metal bands. Kelliher, who had seen Hinds play with Four Hour Fogger, invited him to come by their practice space to jam.

“Brent showed up so wasted he couldn’t even play,” says Kelliher. “He was just playing one note turned up really loud. Brann and I were like, ‘Fuck this guy.’ ” The next day, though, Hinds returned. “He grabbed one of my guitars and was playing all this cool shit. I was like, ‘Where was this guy yesterday?’ “

Hinds brought Sanders aboard to play bass, and after Mastodon’s original singer, Eric Saner, departed, Hinds and Sanders split vocal duties. An early EP, Lifesblood, released in 2001, set a high bar, synthesizing frenzied, intricate guitar work with tricky time signatures and sludgy riffs. Their first full-length, Remission, released the following year, expanded on those ideas, but it was 2004’s Leviathan that began making noise outside metal circles: Ostensibly a concept record based on Moby-Dick, Leviathan was heavier and weirder than its predecessors, incorporating country, jazz, and Southern rock into the otherwise brutal onslaught. A jump to Reprise Records didn’t alter the band’s progression on 2006’s Blood Mountain, which felt more polished and melodic while still offering throat-shredding howls, guitar heroics, and a Tolkien-on-crystal-meth story line to keep the faithful sated. Suddenly, Mastodon were everyone’s favorite metal band: Queens of the Stone Age’s Josh Homme and the Mars Volta’s Cedric Bixler-Zavala guested on the album, they opened for Metallica, and Dave Grohl couldn’t shut up about them. The deep-grooved “Colony of Birchmen” was even nominated for a Grammy for Best Metal Performance.

Then on September 10, 2007, hours after playing “Colony of Birchmen” with Homme at the MTV Video Music Awards in Las Vegas, Hinds got into an altercation with System of a Down bassist Shavo Odadjian and rapper Reverend William Burke (real name: William Hudson), a member of Odadjian’s side project, Achozen, outside the Mandalay Bay Hotel and Casino.

“All I remember is walking through the Mandalay Bay with my shirt off with Jesse [Hughes] from Eagles of Death Metal,” Hinds says. “Then I remember being asleep for three days and having these really blissful, out-of-body feelings. Then, when I woke up, it hurt like fuck.”

Mastodon’s publicist insists Hinds was “cold-cocked,” but Odadjian, speaking publicly for the first time about the incident, says Hinds had been harassing Odadjian intermittently throughout the night before he spotted Odadjian and Burke outside the hotel.

“He ran up and tackled me,” says Odadjian. “I know Brent meant no harm. He was just somewhere else mentally. He kept saying, ‘I love you. I love your bass playing,’ and then coming at me.” Eventually, Odadjian says, Hinds took a swing at Burke, and Burke swung back. “All of a sudden, I see Brent fall and hit his head on the curb.” Hinds sustained a serious concussion and brain hemorrhaging as a result, and was plagued by vertigo for nine months. Beyond Hinds’ injuries, the incident seemed to shake the band’s foundations.

“We felt a little fragile,” says Kelliher. “Everything had been going so well. I mean, I knew this would happen someday-Brent is a loose cannon and gets into trouble, he’s got his demons, but usually everything ends up okay.”

Despite the severity of his condition, Hinds wasn’t much chastened. “The doctors said I had to quit drinking for a couple months, because otherwise your brain or your concussion or whatever won’t heal properly,” he says. “I was back doing drugs and everything by 28 days. But I don’t drink as much as I used to, I don’t smoke crack anymore, and I don’t do tons of fucking pain pills.”

Read the entire Mastodon story in the May issue of SPIN, on newsstands now!