Plus: The Detroit rapper says his next album is nearly finished! 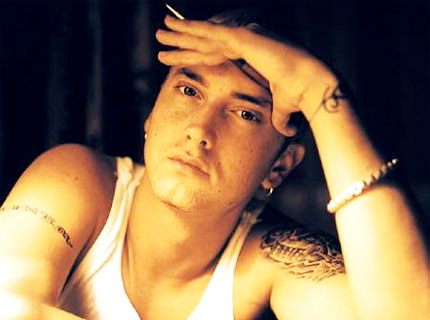 Eminem’s new single, “3 A.M.,” leaked online late last week, and it appears the hip-hop hero’s twisted alter-ego, Slim Shady, is back — and he brought plenty of guns and prescription pills with him.

The song, anchored by Dr. Dre’s hypnotic beat, sees Em stepping into the shoes of a serial killer type, dropping rhymes about murdering customers at McDonald’s and dismembering family members, while blacked out from taking too many Klonopins. He even mulls the merits of Kim Kardashian’s posterior and quotes from Silence of the Lambs.

Last week, Em told listeners on his Sirius XM radio station, Shade45, that he has already filmed a video for the single in Detroit. He also revealed that he is very close to wrapping Relapse’s sequel: “It’s extremely close to being finished. It just depends on how many songs I wanna put on it.”

And that’s not all for the comeback kid: Em also unveiled a viral campaign behind Relapse, which centers on a website for a fictional rehabilitation clinic called “Popsomp Hills.” The place is said to be run by founder “Dr. Balzac,” who makes patients worse after treatment.

The website ties in thematically with the rapper’s recently unveiled album cover art, an artistic homage to prescription drugs.