They fought the law -- and the law won! Click here for the latest courtroom chaos! 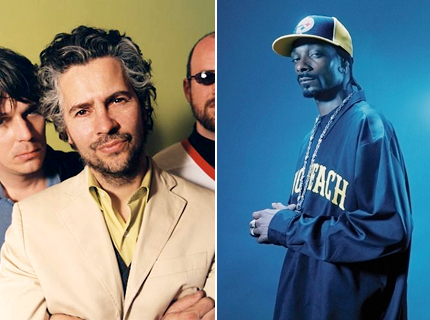 Law-abiding citizens or musical insurgents? You decide! Flaming Lips, Snoop Dogg, and MGMT have all had legal run-ins recently. Below, read about their latest adventures with the law.

Flaming Lips vs. Oklahama:
Clearly the Flaming Lips didn’t get the “Non-Communist Casual” dress code memo. Their song “Do You Realize” is scheduled to become the official state song for Oklahama today when Governor Brad Henry signs an executive order — but it almost didn’t happen: After a bill was passed by the Oklahoma state senate, it was then rejected by the state house of representatives due to a few people being incensed about the fact that Lips bassist Michael Ivins wore a sickle and hammer t-shirt. [Via Billboard.com]

Snoop vs. Stage-Mounting Fan:
Snoop appeared in court in Los Angeles yesterday to testify that he didn’t hit a fan with a microphone at 2005 concert in Seattle. Concertgoer Richard Monroe Jr. alleges that he was “left for dead” after being attacked by the rapper and his security team when he mounted the stage. Snoop had this “safety first” advice to impart: “The best way for the injuries not to have occurred was for him to stay in his seat and enjoy the show like the rest of the fans.” [Via BBC News]

MGMT vs. France:
The Brooklyn electro duo has settled their issues with France’s Union For A Popular Movement party, after it used their song “Kids” in a campaign advertisement without permission. French President Nicolas Sarkozy, a member of the party, has reportedly agreed to give the band a settlement fee (30,000 euros or $39,050), which MGMT plan to donate to an artists’ rights organization. The band declared said victory via an announcement on their website titled, “MGMT Waterloo with France fini!!” adding graciously, “Thank you France for the wonderful food. C’est bon.”