Killers: Better Than Zepp and Nirvana?

Ambitious frontman Brandon Flowers hopes to dethrone the rock legends to become the best band in the U.S. 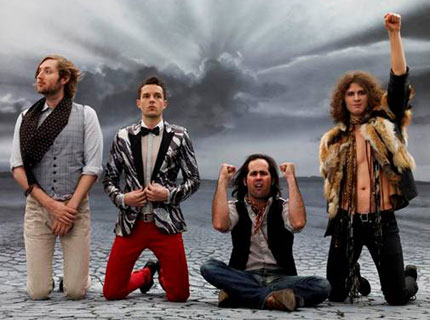 The Killers may be popular in the U.S. — but they’re bonafide mega stars in Europe. Singer Brandon Flowers has a theory about why that is:

“With this last album [Day and Age] there’s been a noticeable shift but we’re still nowhere near where we are in Europe,” Flowers told NME.com of his band’s U.S. popularity. “[In America] people are still so obsessed with Led Zeppelin and Nirvana, those sorts of bands — nobody else is allowed [to grow],” he said. “It’s not just us; there are a lot of great bands that have been held down or confined by the influence of these people that we’ve put up on pedestals.”

So what’s a glam-rock frontman who’s buddies with Jared Leto and Kanye West to do? “I just want to knock them all off!” he declared.

But Flowers is self-aware enough to know that not everyone takes kindly to Sopranos-style talk of “knocking off” rock legends.

“People don’t like that attitude,” he admitted. “It’s almost like they don’t believe that it’s possible that anybody else can be the real deal. It doesn’t matter how many great songs we write or how many great shows we play. But we’re slowly chipping away at it.”