Kanye, Corgan, Nicks on Improving Themselves

The trio address fans -- and plan a better future. Click here to read up on the latest! 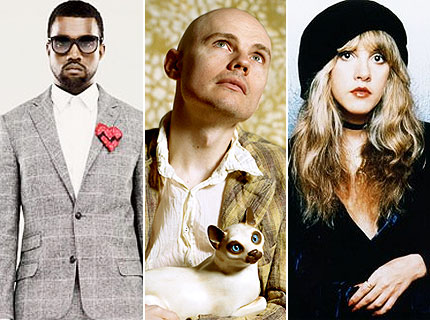 Lately, it’s all about self-improvement for some of music’s hottest stars. See what we mean:

Kanye West: It’s a well-known fact that South Park is mean to everyone — sort of like Eminem. But rather than get hot-headed about the Comedy Central show’s recent lampooning of him as a “gay fish,” Kanye West took the “you hurt my feelings, but nice job with that — I guess I deserve it” tack via a trademark all-caps posting on his blog:

“SOUTH PARK MURDERED ME LAST NIGHT AND IT’S PRETTY FUNNY. IT HURTS MY FEELINGS BUT WHAT CAN YOU EXPECT FROM SOUTH PARK! I JUST WANNA BE A DOPER PERSON WHICH STARTS WITH ME NOT ALWAYS TELLING PEOPLE HOW DOPE I THINK I AM. AS LONG AS PEOPLE THINK I ACT LIKE A BITCH THIS TYPE OF SHIT WILL HAPPEN TO ME. I’M SURE THE WRITERS AT SOUTH PARK ARE REALLY NICE PEOPLE IN REAL LIFE. THANKS FOR TAKING THE TIME TO DRAW MY CREW. THAT WAS PRETTY FUNNY ALSO!!”

Billy Corgan: The Smashing Pumpkins loner took to his band’s website to share some introspection of his own — and even made some promises to himself and his fans in the third person (BC):

“My wish is that from this day forward this group will represent nothing but love and light. If you see BC out there griping, it is only because I have failed to set the proper conditions to be in the love and light with you. The fan is NOT responsible in any way, shape, or form for my happiness or ability to do my job. (Nor have they ever been.) If I have given that impression to any of you through the years I am sorry about that. That was an error on my part. When a fan comes to an SP show we owe it to you to put on the best show possible, rain or shine. I believe the days of standing on a stage somewhere in the world feeling torn about why I am up there are over. SP will be about peace from this day forward as well. The music WILL also reflect this shift in devotion and humble gratitude. You shall see!

Stevie Nicks: The perpetually shawl-cloaked Fleetwood Mac songstress also has self-betterment on the brain, but it has less to do with herself and more to do with bettering the person who might portray her in a film: Nicks is less-than-enthused about Lindsay Lohan’s desire to buy the rights to her life story and to play her on the big screen: “Over my dead body,” she told the New York Times. “She needs to stop doing drugs and get a grip. Then maybe we’ll talk.”