Click here for our look at some of the Web's weirdest news of the week. 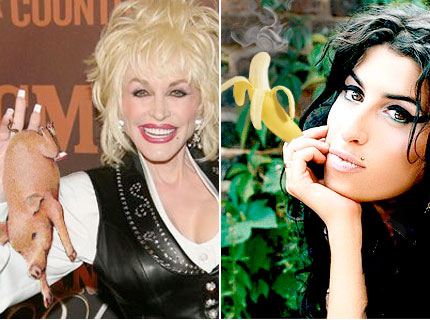 Who knew smoking banana skins had the same therapeutic effect as taking Prozac? Amy Winehouse. After all, she’s on top of all the new drug crazes. [Daily Star]

Dolly Parton revealed that she once drank a pig’s milk… directly from its nipple. This explains A LOT. [CBS News]

French president Nicholas Sarkozy loves Lenny Kravitz — but his wife, first woman Carla Bruni, may have beat him to the punch. [Reuters]

Prince is attempting to seduce Salma Hayek with his new song “Valentina.” Good luck — it didn’t work for us. [Spinner]