The Brit singer stops her protégé and goddaughter Dionne Bromfield from working with the Babyshambles rocker. 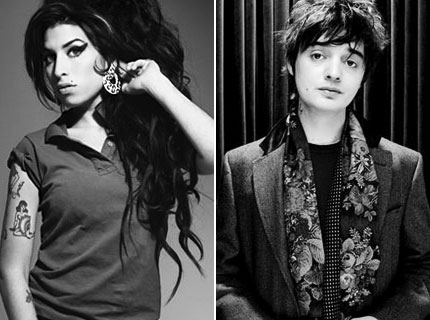 Amy Winehouse hasn’t exactly bowled us over with her “bad influence” detection radar.

But it seems the headline-making songbird is flexing her protective powers when it comes to managing the career of her 13-year-old protégé and goddaughter Dionne Bromfield.

Bromfeld’s debut album is due to be released on Winehouse’s recently-launched label Lioness, and will feature contributions from artists such as “Just Dance” singer Lady GaGa and British soul artist Lemar. But one big name won’t be included on the release, at least if Mother Lioness Amy Winehouse has anything to do with it.

“Pete [Doherty] and Dionne get on like a house fire, but Amy’s really protective of her and doesn’t think a duet with Pete is the right thing to do at the moment,” a source told UK tabloid The Mirror. “The last thing she wants is for Dionne to make the same mistakes she did.”

Doherty, who feels partially responsible for Dionne’s career launch, having helped to introduce her to the public by filming an impromptu duet with Winehouse for YouTube, is disappointed but compliant. “Pete is gutted but he understands,” the source said. “As soon as he has sorted himself out and Dionne’s made more of a name for herself a duet is definitely on the cards.”

But Doherty isn’t the only one in this musical triangle to be dismissed as a bad influence. Winehouse herself was recently bumped from a duet with Doherty by his Grace/Wastelands producer Stephen Street. “I said, ‘No, I’m not having that,'” he revealed to UK newspaper The Observer. “I didn’t want any of that influence. I didn’t want anything to do with Amy Winehouse, to be honest. She’s got her own battles to sort out.”