FREE DOWNLOAD: Frontman Andrew Stockdale is back with new band members! Get their new track here. 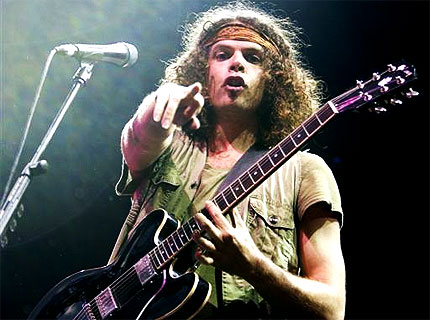 Wolfmother frontman Andrew Stockdale is a man of his word: After both of his bandmates departed the Wolfmother lineup last summer, he vowed to continue recording music under the same moniker, with new members. Now, the wait is over.

Today, the new incarnation of Wolfmother released their first track, “Back Round,” as a free download from their official website. (Instead of payment, they are encouraging donations to the Red Cross Victorian Bushfire Appeal to aid victims of Australian brush fires.)

At first the tune sounds a lot like the original Wolfmother, with loud, fast guitars channeling the rock swagger of Led Zeppelin and the thundering brutality of Black Sabbath. “I’m coming back around,” Stockdale snarls with his familiar, Robert Plant-esque power vocals. But then things take an unexpected turn: In his Aussie accent, Stockdale spits a smarmy talking interlude that recalls neo-glam San Diego outfit Louis XIV: “The tickets sold and the man got rich.”

The band is currently in Los Angeles completing work on their new album with veteran producer Alan Moulder [Via NME.com].