Who filled in for late frontman Bradley Nowell? Click here to find out! 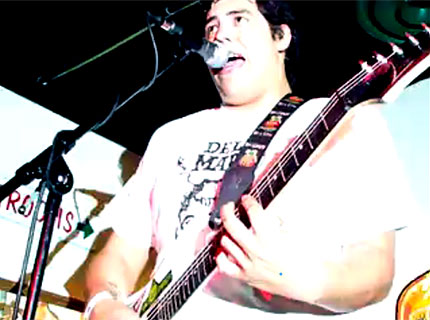 For months rumors have circulated that Sublime — the SoCal ska-punk band who found fame after the 1996 death of frontman Bradley Nowell — would reunite with a new singer. Saturday night at a Nevada Mexican restaurant those rumors became fact when former drummer Bud Gaugh and bassist Eric Wilson were joined by a singer named Rome for a brief set of Sublime classics, including “Wrong” and “What I Got.” The trio, who followed Del Mar (Gaugh’s other band), also played a new original song.

Low-quality YouTube footage and Del Mar’s MySpace page confirm what occurred at Cantina Los Tres Hombres: “So, Del Mar played the gig at Cantina last night … it was packed and amazing. What really fucking killed it was SUBLIME reuniting and playing with new singer, Rome. Sublime doesn’t have any firm tour plans or anything YET, but we’ll keep you posted on their progress.”

But unlike the boys onstage, many fans aren’t exactly excited about the “reunion.” On a message board at PunkDisasters.com one fan wrote, “Sorry, but it’s not Sublime without Brad Nowell.” Another quipped, “That’s like saying Nirvana reunited last night.”