SXSW Tech Talk: Thousands of Photogs, Not Many Pros 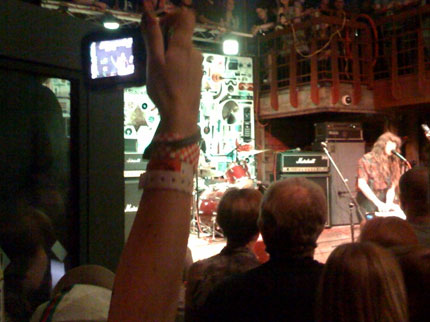 As Beach House took the stage Friday night at the Cedar Street Courtyard for Blackberry’s SXSW showcase, they were met with a sea of cameras, ranging from cellphone cameras to multi-thousand dollar DSLRs and everything in between. But few belonged to professional photographers. Sure, the guy up front recording the show with a Blackberry in each hand was obviously paid by the sponsor, but he was in the minority.

It’s a common occurrence at shows here: a band hits the stage, and for most of the first song you can barely see them through the dozens of cameras held in the air. Seeing so many people recording these shows for their own personal use, one can’t help but wonder just why they’re doing it. After all, there are enough people being paid to capture all these shows that it’s safe to assume you’ll be able to find great pictures online once you get home. But according to a decidedly unscientific survey I took of people snapping pictures in the audience, the point isn’t to take the definitive pictures of these shows.

No, these pictures are taken for Facebook, Tumblr, Flickr, and Twitter, for personal blogs and just to have. They’re taken to prove to friends that they were there and to remember just where they stood when they saw Grizzly Bear play that new song. Everybody wants their own unique and personal shot, no matter how redundant it might seem. And I guess sometimes having to watch shows through a bunch of little LCD screens is the price we pay for it.

Adam Frucci is an associate editor at Gizmodo.com.