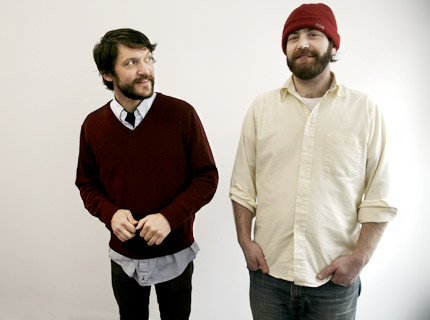 For the latest episode of our new concert series, SPIN Sessions, we invited Omaha’s finest four-piece, Cursive, to drop by our New York offices for an acoustic set. The whole band couldn’t make it, but frontman Tim Kasher showed up with trumpet player Patrick Newbery to play three songs for our editorial staff.

Kasher, also the frontman of the Good Life and a longtime friend of Conor Oberst, has been writing and performing for more than 15 years — and it shows. Playing guitar on three songs off Cursive’s new album, Mama, I’m Swollen (“From the Hips,” “Caveman,” and “What Have I Done?”), Kasher moved from whispers to screams, finger-picking to forceful strumming, and did it with precision and emotional conviction.

Below, watch video of the performance, including Kasher’s explanation of “Caveman”: “I wrote it in the airport after passing the duty free shop thousands of times,” he says. “And I started to realize that I wished I was duty free.”