"It's like space-age modernism," guitarist Tom Dumont says of the stage theme. 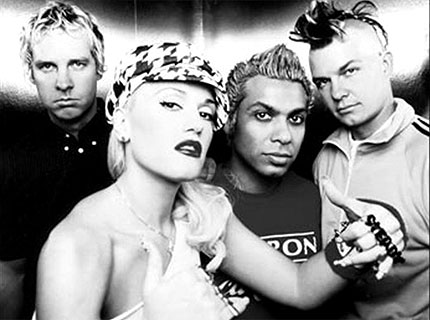 Despite giving away their back catalogue in a bid to convince fans to buy higher-priced tickets, the theme for No Doubt’s upcoming reunion tour isn’t “credit crunch.” As it turns out, the band is taking a cue from late film director Stanley Kubrick’s 1971 classic Clockwork Orange.

“You know, it’s kinda funny, whenever we do an album or a tour we’ve noticed that if we have a really strong theme that everything falls into place better,” guitarist Tom Dumont told Buzznet. “Gwen [Stefani] came up with the Clockwork Orange thing — she started getting into the visuals of those modernist movies from the ’60s.”

Here’s a hint at what fans can expect: “It’s likethis space-age modernism — it’s retro and modern at the same time, sowe’re building this crazy stage set that has that vibe. We have a bunchof really great artists doing T-shirts and posters that echo that,”Dumont revealed.

While most bands plan a tour around the promotion of new material, Dumont is up front about his band’s alternate approach. “We were trying to find out ways — because we’re not releasing an album — to raise awareness for the tour,” he said. “There’s a whole look for the tour even though there’s not an album yet.”