The metal-mongers spill the details behind their insane clip -- click here to watch! 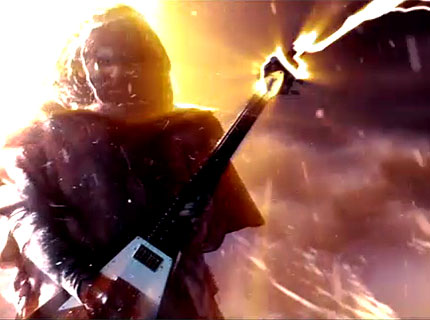 Guitars that shoot lightning? Foxy babes? A giant Yeti? Are we trippin’, brah?

Nah, it’s just all a part of Mastodon’s video for “Divinations,” the lead single off next month’s Crack the Skye. Confused?Let drummer Brann Dailor explain.

“We’re explorers on a mountain, kind of a Mt. Everest type of situation, sort of like John Carpenter’s The Thing,” Dailor tells SPIN.com about the clip, which was directed by Roboshobo (Metallica) and filmed at Jim Henson Studios in Los Angeles, CA. “We’re climbing up a mountain, finding various early-man artifacts along the way that flash back to us as cavemen, and using these artifacts in some kind of bizzare ritual. We get to the top of the mountain and discover an iceman, and it happens to be [frontman Brent Hinds], who is frozen in a block of ice. We pull out a Flying V, blast the ice away with lightning that comes out of the guitar and jam the end solo with Brent on the top of the mountain. And then he kills us and eats us, and then he gets killed by a Yeti.”

Even though the abominable snowman that rears his head in the “Divinations” video is CGI, the boys in Mastodon didn’t always plan it that way “[Tool drummer] Danny Carey was going to dress as the Yeti,” Dailor reveals. “We had it all worked out but we ended up using a CGI Yeti instead of having the actual suit.” It’s okay, Brann — CGI or not, it still freaks us out.

Check out the video below. Then, bang your head in the comments section.