Common, Erykah Badu, and the whole crew of his G.O.O.D. Music record label join 'Ye onstage for a two-hour show. 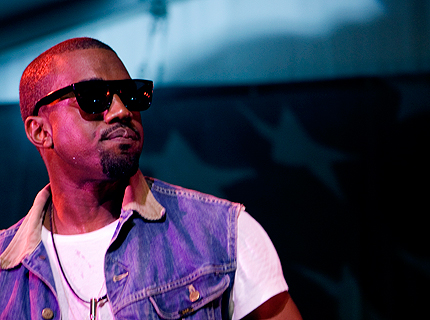 Kanye West invaded Austin, TX, Saturday for the last night of South by Southwest. But rather than perform a set of standard Kanye tunes, the hip-hop star played host to new artists on his label G.O.O.D. Music, including Consequence, GLC, and Big Sean. And he invited friends like Common, Erykah Badu, Fonzworth Bentley, and Kid Cudi to join the party onstage.

‘Ye hit the spotlight at Fader/Levi’s Fort at 9 P.M. sharp and kicked things off with a few verses of “Amazing.” And the extravaganza didn’t stop for two hours; Kanye rapped alongside the guest artists, as a backing band of guitars, bongo drums, two DJs, and two back-up singers provided accompaniment. Fonzworth Bentley — in a fancy suit, naturally — took the stage for a step routine. West traded verses with 88 Keys on “Stay Up (Viagra)” and Kid Cudi on “Welcome to Heartbreak.” Then he freestyled with Common and Erykah Badu.

The show ended with the whole crew onstage singing Kanye’s “Love Lockdown.” West even missed a line, and exclaimed, “I got too excited, y’all!” The crowd went wild — and for good reason: Rap’s biggest star had come to SXSW and put on one hell of an all-star show.