Is fame a medical condition? Carlos D explores the topic in his new movie. 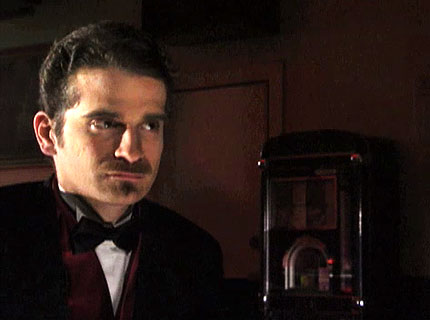 Apparently that whole US Weekly “Stars: They’re Just Like Us!” feature is a total scam. Don’t freak out, but stars aren’t just like us. The sad truth is, those tanned, miniature-dog-toters might look like they’re having a good time lunching at the Ivy, but, in fact, they’re suffering from a very serious affliction.

So says Interpol bassist Carlos Dengler. His debut film, My Friends Told Me About You, explains that celebrity is “part of a psychosis derived from the overabundance of positive value assignments made by a crowd choosing a particular visage to carry these assignments.”

The film, which Dengler co-wrote and stars in, will premiere at New York’s Anonymous Gallery April 17 (running through May 5) and later be included in the Spring 2009 issue of Wholphin, the DVD magazine from McSweeney’s.

The film runs 26 minutes, but for those skeptical about fully grasping this celebrity sickness deal in under half an hour, Dengler has offered up his loquacious “Ontology of Celebrity” explanation on the film’s website (where you can also watch the trailer).

If you’re too busy scanning Perez Hilton for the latest gossip to read the aforementioned “Ontology,” we can tell you that it basically boils down to this: Being a celebrity means lots of people randomly love you and you never get to meet them all, which causes you to be wounded and trapped in “hysterical purgatory.” Hey, maybe stars are like us, after all.