The actress weighs in on Phoenix's rap legitimacy. Plus: Was the heckler at his Miami show a fake? 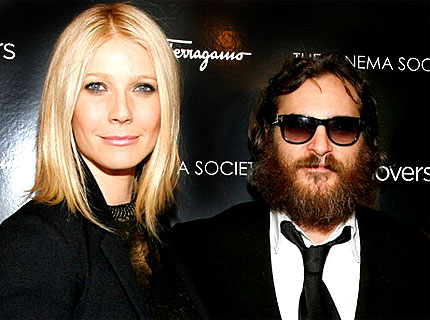 In a recent interview the actress commented on Phoenix and his retirement from film to pursue hip-hip. “I’m not totally convinced that this is his last film,” she said of her Two Lovers costar. “I think that there might be something going on. I’m not sure what, but… Maybe it’s like a big performance art piece.”

And when asked whether Phoenix had exhibited any passionate tendencies for rapping during the filming of Two Lovers (in which he also raps), she answered, “No… He had fun making up his rap, but I’m not sure that he’s like, a true hip-hop artist.

Yes, Gwyneth. It does, doesn’t it?

Add this little bit to the “odd” column: Phoenix’s recent confrontation with a heckler at a Miami gig has been downgraded from heated brawl to prolonged man-grip by a source who spoke to the New York Post: “It was a fake fight,” the witness said. “Nobody threw a punch. They were just holding onto each other.”

You be the judge: Check out video from the performance below, complete with the action-packed “confrontation” (starting around the 2:50 mark).