"Here's a song you can understand!" sings Paul Smith. Get the post-punk gem here before its May release. 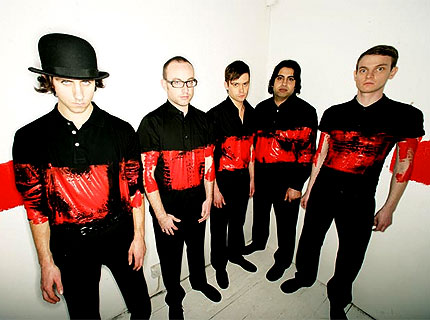 Brit post-punk quintet Maximo Park are celebrating the May release of their new album, Quicken the Heart, by treating fans to a sneak preview!

Beginning today, you can download new track “Wraithlike” for free off the band’s website for two weeks only. The song, about lost love, is a rousing punker with jittery guitar, throbbing synths, and Smith’s rapid-fire lyrics: “Here’s a song that finally you can understand / Filled with wraithlike things / Quicken the heart!”

Frontman Paul Smith explained the album’s title in a blog post on the band’s site last week. Its original working title, Rollerdisco of Dreams, was scrapped in favor of Quicken the Heart.

“It’s a pulsating listen, hence the title (which appears in one of the songs, so keep an ear out for its appearance),” Smith wrote.

He went on to reveal that the album — recorded in Los Angeles with Yeah Yeah Yeahs producer Nick Launay — would also be available in a special edition CD and DVD format, which will include a 65-minute tour film featuring live footage of the band’s sell-out homecoming show at Newcastle Arena, plus “backstage tomfoolery.” Watch a clip from the film on the band’s website.