Sounds like the Libertines and Babyshambles rocker isn't over Kate Moss. Listen here! 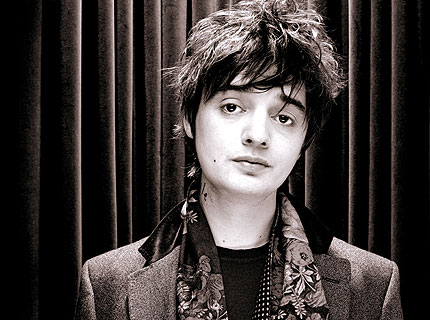 Pete Doherty is totally not over Kate Moss.

We already knew he still has the hots for his old band the Libertines — he’s been openly wooing collaborator Carl Barat in a bid to get back together. But even a casual listen to Doherty’s new solo album, Grace/Wastelands, which he is currently streaming on MySpace before its March 24 release, reveals the singer-songwriter is nursing feelings for his ex.

His longing is made plain on “Sweet By and By,” an old-timey piano-driven tune that features jazz trumpet flourishes and sounds like it’s auditioning for inclusion on a vintage Woody Allen film soundtrack. With Blur’s Graham Coxon on guitar, Doherty croons: “It wasn’t so long ago when you said you loved me so / Where did you go? You didn’t even say goodbye.”

And when Doherty sings, “You left me wondering whether love’s just a lie / You’ve found some other guy and all I do is hang my head and cry,” it seems safe to assume he’s talking about Moss’ new BF, the Kills’ Jamie Hince.

But Doherty isn’t entirely without female companionship on the album: Dot Allison is kind enough to lend her breathy vocal coos on “Sheepskin Tearaway.”

Listen to the album. Then let us know what you think in the comments section.