Plus: Get the early review of new tunes by Ronson collaborator Amy Winehouse. 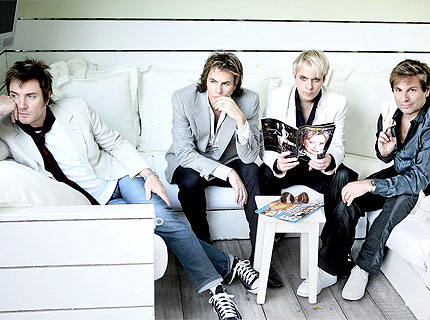 Duran Duran have hit the studio with super producer Mark Ronson to record their 13th album.

“For over two decades, Duran Duran have given listeners a catalogue of new music that is both innovative and influential,” the group said on their website. “Working with Ronson is a natural next step for the band, who continue to challenge themselves with each new phase of their career.”

It’s not the first time this group has worked together — they were paired up last summer, when Duran Duran tapped Ronson to rework some of their classic tunes for a one-off gig in Paris. They were impressed by his solo album as well as his work on Amy Winehouse’s album Back to Black, which keyboardist Nick Rhodes described as a “masterpiece record.”

For starters, she’s been influenced by her stay in Jamaica — but not everyone loves that musical direction. “She seems to have ditched her trademark vintage soul sound and is now heavily influenced by reggae,” a source told UK paper The Sun. “Her bosses don’t think it’s a wise move to change her style so sharply and have told her that.”

The source added that the label was also put off by the “dark tone” of the new tunes: “The lyrics are very dark indeed. While she’s known for her confessional style and has been very successful with it, many of the tracks are near the knuckle. In the past, she’s written frequently about broken hearts and boyfriends, but this time round she’s delving into harrowing terrain.”