New Hampshire quartet battles the elements, gets a boost from Arcade Fire. 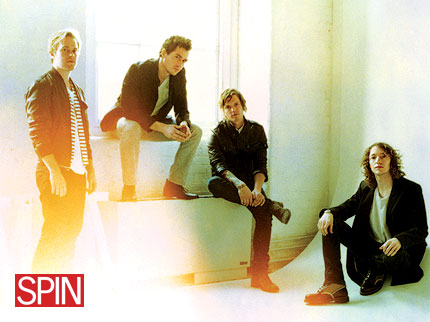 Musicians tend to play better after warming up. Or, as the case may be, thawing out. “Our first practice space was in a room we couldn’t afford to heat,” recalls Wild Light’s cofrontman Timothy Kyle, thinking back to the band’s winter rehearsals in Quincy, Massachusetts.

“When we finally had a gig someplace warm, it was crazy how limber my fingers felt,” says Seth Pitman, 25, who shares songwriting and instrumental duties for the folk-pop foursome with Kyle and Jordan Alexander, both 28. “Playing is easier when you’re not freezing your ass off!”

It’s also easier when you have a history as long as Wild Light’s. The friends — including drummer Seth Kasper, 27 — grew up in New Hampshire and played together in a Clash-inspired outfit throughout their teens. They broke up before heading to college, but when they all found themselves back home after graduation, the flame was rekindled. “We realized there was something between us that we hadn’t been able to replicate with anyone else,” Kyle says. Included in that creatively unsatisfying “other” are Arcade Fire — an early incarnation of which featured Kyle. (Alexander roomed with Win Butler at Exeter and introduced him to Kyle.) The groups remain friends and toured Europe together in late 2007.

Last summer Wild Light traveled to L.A. to work with producer Rob Schnapf (Elliott Smith, Beck) on their debut, Adult Nights (StarTime International), a humble blend of twinkling keyboards, crisp guitars, and hopeful melodies, all cloaked in the shadows of English mope rock (sample lyric: “I ain’t never gonna turn around / I’d rather make the whole world pay”). “We don’t follow much new music,” says Kyle. “We’re more influenced by Dylan and the Smiths than whatever’s on the blogs.”

Standout Nights tracks like the shimmering “Heart Attack” and pensive “Lawless River” suggest that the aspiration isn’t asinine — provided the quartet keeps out of the cold. “The weather in California was definitely inspiring,” Kyle says. “It was so nice outside that we actually wanted to go play.” Guess no one told him 80 percent of success is just showing up.