From Chris Brown to blink-182, this week's stories got people talking. Plus: Yeah Yeah Yeahs, No Doubt, U2, and more! 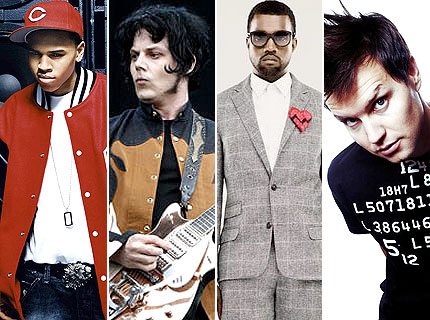 This week’s top stories had everyone talking: Kanye West mouthed off about Thom Yorke, the White Stripes disappointed on Conan’s last night at Late Night, Chris Brown and Rihanna continued to cause controversy, and SPIN’s Ellen Carpenter had some eyebrow-raising ideas about how to spend the $787 billion economic stimulus — and blink-182’s Mark Hoppus had something to say about it on his blog!

All these, plus the week’s best audio/video, news, and reviews below.TOP STORIES:

SPIN’s Ellen Carpenter tells the President how to spend some of that $787 billion, as he prepares to address Congress tonight. Read >>PLUS:

Watch behind-the-scenes footage of Karen O and Co. striking a pose in New York City for our March cover. Read >>PLUS:

“Vertigo” be damned: Bono and Spidey are headed to Broadway. Click here for details! Read >>PLUS:

At NYC gig, modern emo’s forefathers play landmark 1999 album in its entirety, a decade to the day it was released. Read >>PLUS: