Hilton propositions the Beatles legend. Click here to find out who flinched. 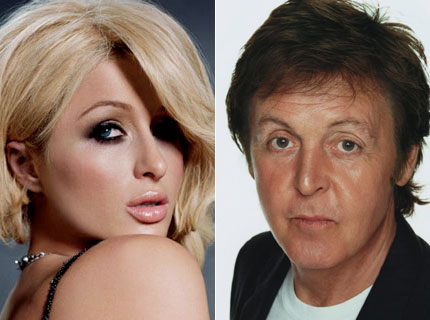 You may have heard that sometime aspiring pop star Paris Hilton is hot on the reality-televised trail for a British best friend. And she’s already ruled out Amy Winehouse. But who better to fill the slot than Paul McCartney? It doesn’t get more British or Best — he’s a Beatle, for chrissakes!

It seems Hilton was in hot pursuit of McCartney backstage at this year’s Grammys — she reportedly asked him to consider recording a duet with her [via The Sun], explaining “I’m a singer too and have had an album out.” His response? “I’ll have to check my schedule.”

Undaunted, Hilton allegedly proceeded to compliment McCartney on his “cute” hair: “It’s just like in the Beatles.” But unlike on Hilton’s reality show, compliments on coiffure don’t necessarily lead to everlasting friendship when talking to Macca.

Still, you can’t blame a girl for trying. After all, McCartney is known for employing his own less-than-conventional methods when it comes to pursuing collaborations.