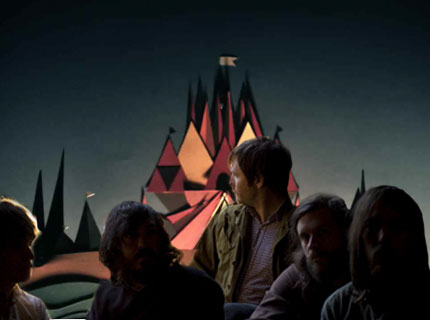 With pastoral harmonies, gentle acoustic guitars, and catchy folk songwriting, Fleet Foxes are one of the most adored bands to emerge from 2008 — hell, even Starbucks loves ‘em. But with their brand new music for “Mykonos,” the Seattle boys are getting plain weird.

In this stop-animation clip, origami-style mustaches fly. And paper creatures create — and, eventually destroy — a colorful castle-like structure. All this happens while the best song off the band’s 2008 Sun Giant EP rolls by. Bandleader Robin Pecknold’s brother, Sean, the man behind the Foxes’ video for “White Winter Hymnal,” also directs here and brings life to the slightly creepy paper figurines.

How did he do it? Below, watch the video, then a behind-the-scenes clip showing just how Sean Pecknold cut, pasted, and worked his computer magic.