The flamboyant frontman adds vocals, piano, and more to the Brit band's new single. Click here to get the song! 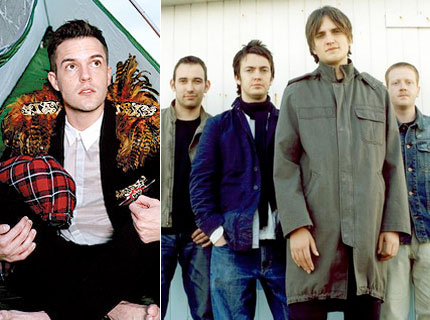 Brit rockers Starsailor aren’t the biggest British band in the U.S., but they certainly have a fan in Killers frontman Brandon Flowers, who remixed the band’s latest single, “Tell Me It’s Not Over,” and added backing vocals, piano, and more to the track.

Flowers has followed Starsailor for years, and even tapped the band to open the Killers’ 2007 tour. According to a source close to Starsailor, Flowers hit the studio with Day and Age producer Stuart Price — unsolicited, we might add — to remix and record contributions to the new tune. Starsailor frontman James Walsh loves the results, according to our source, and with the remix’s drum assault and piano melody — not to mention Flowers’ soaring vocals — we think you will too!

Starsailor’s next album, All the Plans, drops stateside in late-April.

Click here to download Flowers’ remix of “Tell Me It’s Not Over” below. Then sound off in the comments section.