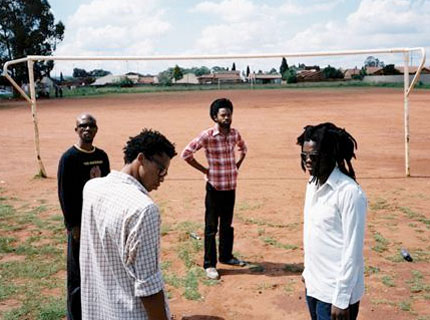 BLK JKS (pronounced Black Jacks) fuse the electro-funk experimentalism of TV on the Radio with the Afro-pop guitars of Vampire Weekend, and drop in hints of jazz, ethnic African music, and the prog-rock of contemporary acts like the Mars Volta.

The quartet — childhood friends Linda Buthelezi (vocals) and Mpumi Mcata (guitar), plus Molefi Makananise (bass) and Tshepang Ramoba (drums) — released their debut, a vinyl-only 10-inch, in 2007, which caught the ear of Diplo, who was touring in South Africa. He arranged for the group to perform in the states last year, including a buzzed-about SXSW show.

Soon, Secret Machines’ Brandon Curtis was introduced to BLK JKS and was so impressed he invited the quartet to join him in New York City’s legendary Electric Ladyland Studios. The result: MYSTERY EP, BLK JKS’ debut on Secretly Canadian out March 10.

Can’t wait to hear the band’s much admired new sound? Download the psychedelic “Lakeside.” Then leave your thoughts on the song in the comment section.