Click here for details on the Brooklyn band's upcoming record and DVD documentary! 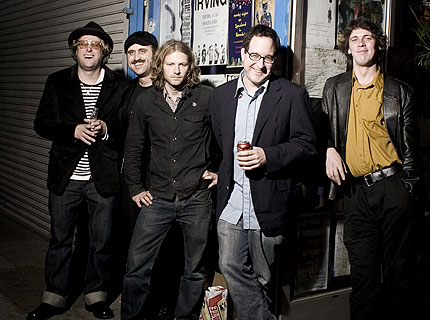 The Hold Steady, renowned for their excellent performances on the road, are releasing their first live album, A Positive Rage, April 7. And luckily for fans, the record also includes two previously unreleased songs!

The live portion of the double-disc album features the the band’s 17-song set recorded October 31, 2007, at the Metro in Chicago, IL. In addition, the release arrives packaged with studio versions of five bonus tracks (including previously unreleased tunes “Spectres” and “40 Bucks”) and a 53-minute documentary that follows frontman Craig Finn and Co. across the U.S. on their 24-date tour behind Boys and Girls in America, and to the U.K. for their first show in London.

There’s even a booklet with personal band photos and stories, like this bit from Finn about a show on the tour: “It ended up being a fantastic suburban blow out with band and audience on the floor, Frisbee and tailgating in the adjoining parking lot, and everyone singing along to every song… It reminded me of the hardcore shows I loved as a kid, everyone sweating and screaming together in a rented hall.”