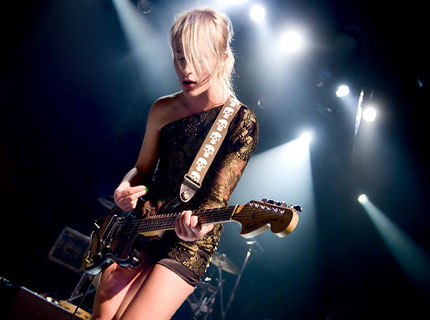 Metric will release their first record in four years, Fantasies, on April 14.Anxious to hear the new tunes?Why wait: SPIN.com has video of the band playing acoustic renditions of two new songs in our office!

Below, check out video of frontwoman Emily Haines and guitarist Jimmy Shaw performing “Twilight Galaxy” and “Front Row.” Then watch legendary VJ John Norris chat with the duo about their upcoming release, its creation and sound, the band’s decision to release it without a record label, and Haines’ peculiar writing process: “I basically tricked myself into thinking that I was never going to write another song and that it didn’t matter,” says Haines. “And it totally worked.”